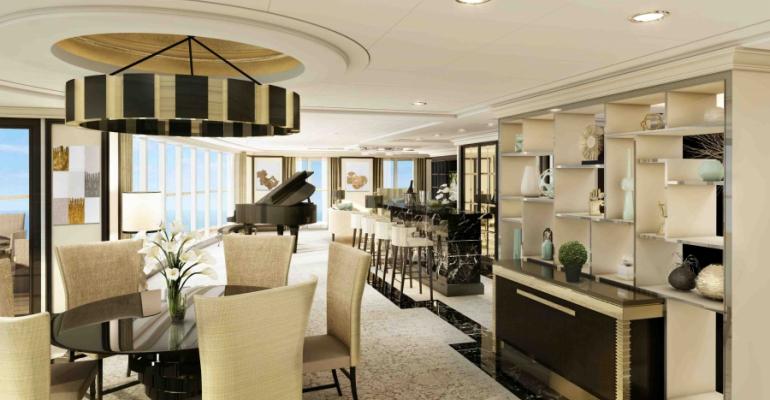 The Regent Suite - has its own spa retreat

'We want to redefine the luxury vacation and set a new benchmark,' Jason Montague, president and coo of Regent Seven Seas Cruises, said in revealing the first details of what's being called the most luxurious cruise ship ever built. The 56,000gt, all balcony suite vessel will carry just 750 passengers, making it exceptionally spacious.

The top Regent Suite is dripping in rich marbles, wood veneer and gold and silver inlays. Its garden has a forward-facing view on Deck 14, while the ship's bridge is on Deck 10, so suite guests will have a better view than the captain, Montague quipped.

In a first at sea, the Regent Suite has an in-room spa retreat with its own sauna, steam room and heated ceramic lounge chairs. Unlimited Canyon Ranch SpaClub treatments are included.

The Regent Suite's look was inspired by the Hamptons, with a modern twist, according to Tillberg Design of Sweden's Michal and Urszula Jackiewicz. Every element of the suite is custom-designed, including a Steinway grand piano by Dakota Jackson.

The 53 Penthouse Suites, 450 square feet each, with a split living and sleeping area, have a sophisticated neutral palette with sapphire blue accents and a high level of detail, all the way down to the bedside tables.

'We tried to drill down into the detail, which really defines what luxury is all about,' Greg Walton of RTKL said. 'This whole design was crafted like a fine jewel box.'

The two-deck-high Constellation Theater by Siobhan Barry of ICRAVE has cabaret seating with tables topped by hand-blown Murano glass lamps and luscious silk, rosewood and gold and silver leaf accents, while the Observation Lounge, by Yohandel Ruiz of RTKL, is in a posh, Roaring '20s Art Deco style that evokes images of 'The Great Gatsby.'

What does it mean to work on the most luxurious cruise ship ever built?

'It's the best thing a designer could hope to do,' ICRAVE's Barry said. Typically, budget is the starting point dictated by the client. But in the case of Seven Seas Explorer, creativity was given free rein, allowing everyone to raise the bar, she told Seatrade Insider.

Barry hopes that when people come on board, they'll feel a sense of comfort and glamor. 'A good space can inspire you to dress up and go out. It can make you feel a little bit more glamorous,' she said.

A sophisticated contemporary room with an aqua crystal chandelier as its centerpiece and mother of pearl and gold and silver leaf detailing highlight Compass Rose, the main, open seating restaurant, Per Lindqvist of Tillberg Design of Sweden said. The place settings are Versace.

A chic buffet restaurant by day, fine dining spot by night, La Veranda offers 270-degree views and has a 1960s Italian Riviera flair, according to ICRAVE designer Stephanie Rodriguez. Special screens will conceal the buffet at night when the spot transforms into the elegant Sette Mari at La Veranda with distinct china, linens and menu.

Regent's Prime 7 steak house has a sophisticated decor reminiscent of a private London gentlemen's club with intimate seating alcoves for two and a 'library' for private dining or after dinner drinks by a faux fireplace, Rodriguez said. Rich purples, silver, gray and gold tile accents dress the room.

Regent evp Robin Lindsay said getting the ship's layout right was the biggest challenge. That began with how to fit in the extra-large suites that distinguish the vessel. It turned out the spa had to be moved from up forward to down aft, and a Deck 14—where the Regent Suite resides—was created.

The company also held a design competition that invited top firms to unleash their creativity.

Lindsay, who has been the project manager for eight upscale and luxury newbuilds during his career, said Seven Seas Explorer tops anything he's done yet. He credited Frank Del Rio as the driving force and the visionary behind such a ship.

The ship is under construction at Fincantieri's Sestri Ponente yard and due to enter service in summer 2016. Reservations for Seven Seas Explorer’s maiden voyage and inaugural season open Jan. 19 for Seven Seas Society members and will become widely available starting Feb. 4.