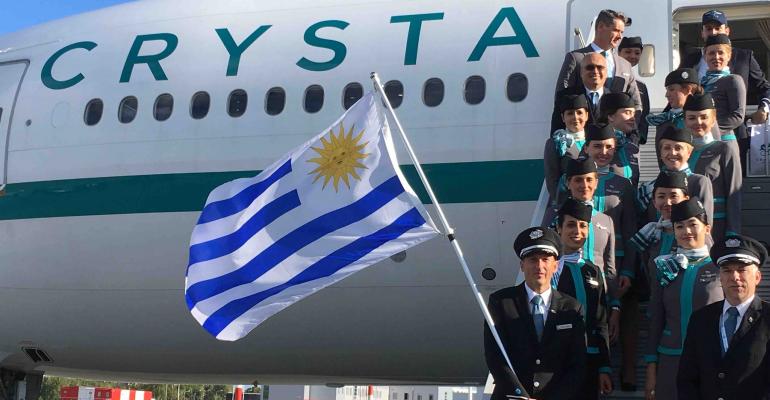 The Crystal Skye flight crew welcomes Team Uruguay
Crystal AirCruises’ Crystal Skye—touted as the most luxurious privately-owned Boeing 777-200LR—carried the players, coaches and members of the Uruguay National Football Association to Russia for the World Cup.

The aircraft took off from Montevideo Carrasco International Airport in Uruguay on June 9. Crystal Sky flew full, with 88 travelers in 180-degree lie-flat seats for the 15.5-hour flight. Crystal’s crew of 20 attended to the team’s needs along the way.

'It’s an honor to work with this esteemed football club for such a significant journey,' said Thatcher Brown, president of Dream Cruises, who also oversees Crystal Cruises’ Asia business development including AirCruises.

Streaming on HD TVs at each seat

In flight, the team used the integrated entertainment library and streaming options on the HD TVs at each seat in between team meetings and socializing in Crystal Skye’s dedicated lounge.

Uruguay’s team is currently up in its World Cup matches, besting Egypt 1-0 during the June 15 game. The team is set to face Saudi Arabia on June 20 and plans to return home aboard Crystal Skye once the tournament has concluded.

Crystal Skye charters have been operated by Comlux Aviation since 2017.