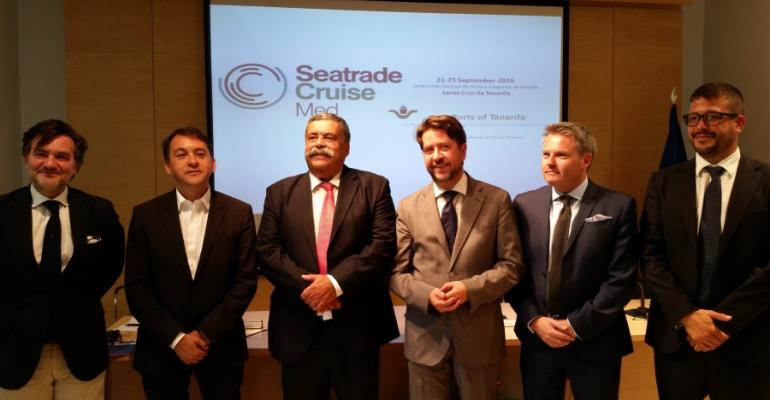 Tenerife’s Santa Cruz has been announced as the venue for 2016’s largest cruise industry event focussing on the Mediterranean and its adjoining seas: Seatrade Cruise Med 2016.

Pedro Rodriguez Zaragoza, president of the Port Authority of Santa Cruz de Tenerife explained: ‘it is a great honour, and we are absolutely delighted to have this trade fair in Tenerife for the first time in the Atlantic Islands.’

Airam Diaz Pastor, commercial director Port Authority of Santa Cruz de Tenerife and director, projects & studies for MedCruise added ‘First and foremost this is a very special day full of joy and we have to thank Seatrade that they have chosen Tenerife to be the host of Seatrade Cruise Med 2016. For the first time in history the event will be held outside the Mediterranean but that is because we are a member of MedCruise.'

Alongside a showcase exhibition, conference and travel agent training, the event’s conference will focus on the industry’s key topics including the current state of the cruise industry in the Mediterranean region and its adjoining seas, itineraries and shorex, the cruise line/port relationship, shipbuilding and ship supply.

The conference will build on the event’s 2014 success in Barcelona, Spain, where almost 700 delegates from the industry discussed the principal issues facing the Mediterranean region. Over 3,500 participants visited the exhibition in 2014 which showcased over 180 exhibitors including many newcomers to the cruise market.

Tom Matesanz, vice president, communication and public affairs, CLIA Europe (Cruise Lines International Association commented: ‘At a time when collaboration is so important, Tenerife has shown that they can rise to the challenge for everything this sector means.’