Trio of Carnival group brands are getting four Fincantieri newbuilds 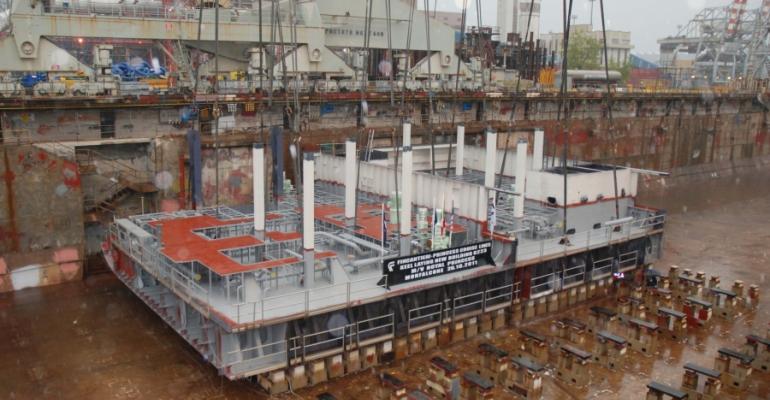 Among the newbuilds is a fourth Royal Princess-class ship for Princess Cruises. Pictured is the keel of the original ship in the series, 2013's Royal Princess

Two ships for Costa Asia, P&O Cruises Australia's largest vessel and a fourth Royal Princess-class ship for Princess Cruises are part of a €2.5bn order capping 2015. Carnival Corp. & plc signed a memo of understanding with Fincantieri for deliveries in 2019 and 2020 from the Monfalcone and Marghera yards.

Final contracts are expected to be executed in 2016.

The agreement defined which Carnival operating companies are getting additions from a five-ship order with Fincantieri that was first announced in March. So this leaves one vessel still to be assigned to a brand, and to be delivered in the 2021-2022 period.

The pair of 135,500gt newbuilds for Costa Asia are destined for the China market, while the P&O Cruises Australia vessel will carry 4,200 passengers—way more than the brand's next largest ship, which has capacity for 2,250 passengers. And the Princess vessel is a 143,700gt ship built on the design platform used for Royal Princess, Regal Princess and Majestic Princess, the latter to be customized for China and scheduled for delivery in 2017.

Carnival Corp. & plc said each of the four new ships will be specifically designed and developed for the brand and market it will serve.

The order means the Carnival group has 17 newbuilds scheduled for delivery between 2016 and 2020.

Arnold Donald, president and ceo of Carnival Corp. & plc, stressed the ships are consistent with a long-term strategy of measured capacity growth. He noted this includes replacing less efficient ships with newer, larger and more efficient vessels over a specific period of time.

For Fincantieri, the agreement comes during a 'real and beyond all expectations boom of the cruise sector,' as ceo Giuseppe Bono put it. He added the projects ensure continuity and development for Fincantieri and further strengthen its consolidated partnership with the Carnival group.

Carnival Corp. & plc has invested more than $25bn in Italy through its partnership with Fincantieri, making it one of the country's largest foreign investors. The shipbuilder has churned out 59 vessel for Carnival brands since 1990. Another 10 ships for the group are on order.

Along with the five newbuilds from Fincantieri, Carnival in March ordered four ships from Meyer Werft. Two of the Meyer vessels, from the Turku yard, were assigned to Costa Cruises and two, from the Papenburg yard, to AIDA Cruises. All four are LNG-powered.

In a note, UBS pointed out that seven of the total nine ships are for Europe or Asia Pacific, not North America. And eight of them will be delivered in the first two years of the designated 2019-2022 period.

So, additional capacity is entering service early, UBS analyst Robin Farley said, and the Carnival group is now averaging more than the two to three new ships per year it had previously outlined.

Meanwhile, Royal Caribbean Cruises Ltd.'s seven ships for delivery in the same period is a slight increase in that company's one ship per year average, Farley noted, with RCL's new guidance on capacity growth targeted at 3% to 5% annually.