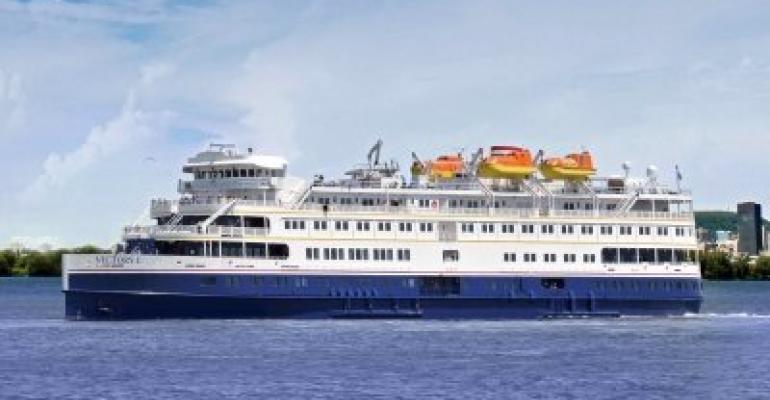 The 202-passenger Victory I here, and sister vessel Victory II, will explore a wider range of destinations in 2020

This is the first season the 202-passenger Victory I and Victory IIare being operated by American Queen Steamboat Co.

'Our team was thrilled with the 2019 itineraries and is proud to have expanded those offerings with the new 2020 itineraries,' said John Waggoner, chairman and CEO, American Queen Steamboat Co.

'St. Lawrence Seaway Exploration' on Victory I begins with a pre-cruise overnight in Halifax, Nova Scotia, before departing on an 11-day voyage that ends at Buffalo, New York. The ship will head through the Strait of Canso to the St. Lawrence Seaway and Ontario’s Thousand Islands. Ports include Charlottetown (Prince Edward Island), Québec City, Montreal and Port Colborne (Niagara Falls).

'Masterpieces of the Great Lakes' on Victory I sails from Chicago to Hamilton, Ontario. The nine-day travels through Lake Michigan to the Port of Muskegon, to Lake Huron for Mackinac Island and then Lake Erie with stops at Detroit, Cleveland and Port Colborne (Niagara Falls).

'Provincial Passage to New England,' on Victory I, sails from Hamilton to Boston in a 13-day journey showcasing the Canadian Maritimes. Beginning with a pre-cruise stay at Niagara Falls, then departing from Hamilton, the cruise sails through Ontario’s Thousand Islands and continues on the St. Lawrence Seaway to Montréal, Québec City, Charlottetown, Halifax and Portland (Maine).