A week in the life of Richard Fain and Adam Goldstein 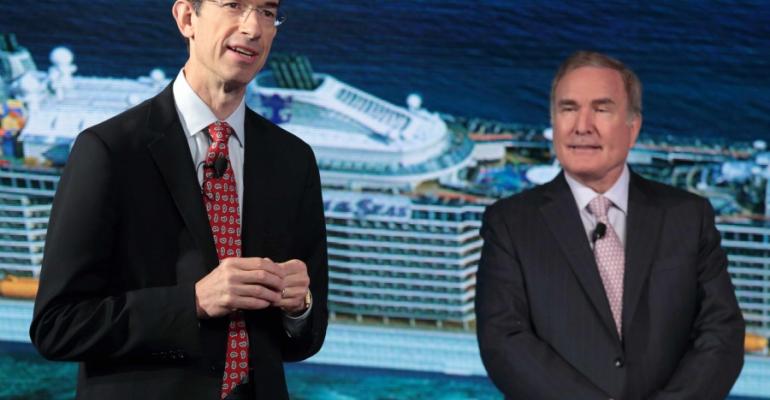 Goldstein and Fain - Quantum and Anthem previews, Oasis 3 keel-laying and Oasis 4 order, all in a week

A walk-through of Quantum of the Seas and viewing Anthem of the Seas, followed by the keel-laying for Oasis 3 and the surprise announcement of an Oasis 4 order—it's a week in the life of Royal Caribbean top brass Richard Fain and Adam Goldstein.

In a new blog post, Goldstein describes how last week, after spending hundreds of hours since early 2010 planning the Quantum-class ships, to see the whole of Quantum at Meyer Werft in Papenburg was 'very special.' Viewing the initial one-third section of Anthem of the Seas was a reminder the sister ship is coming a scant six months after Quantum.

Goldstein says he came away from the visit confident that the Quantum features—including entertainment and technology elements not yet revealed—will be 'spectacular.'

Then it was on to Saint-Nazaire for the Oasis 3 keel-laying, where Goldstein notes STX France used its 1,400-ton rated gantry crane for the first time to lower the grand block into the dock. The approximately 1,000-ton keel was 'almost certainly the heaviest grand block ever constructed in one piece and lowered into a drydock to become part of a cruise ship,' he writes.

While it's too early to tell where Oasis 3 will sail, Goldstein notes that with Oasis of the Seas in Europe for a short stint this year and Allure of the Seas sailing a full season in 2015, 'there are no meaningful limits' to where the Oasis fleet may operate.

Together with the Quantum-class trio, Royal Caribbean vessels 'will be visible in many parts of the world much sooner than many might have expected,' he writes.

As a vivid illustration, Quantum of the Seas is set for year-round operations from China in June 2015.