Why RCL's Caribbean bookings are 'robust' without Cuba 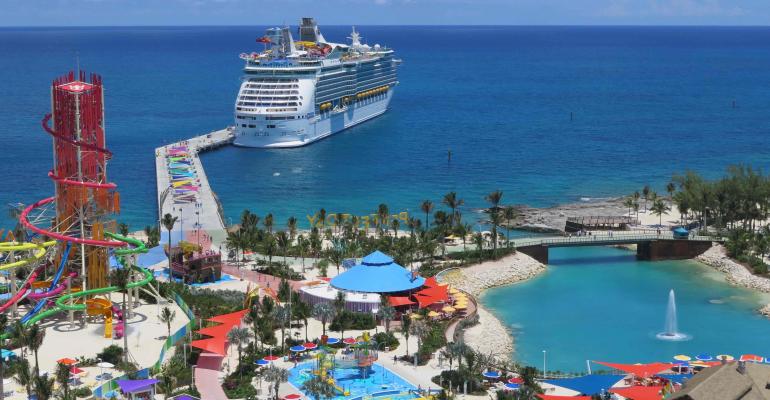 Factors bolstering Caribbean performance include demand for Perfect Day at CocoCay and the 'Royal Amplified' improvements to ships on short cruises, such as Navigator of the Seas, pictured here PHOTO: Anne Kalosh

Perfect Day at CocoCay is now Royal Caribbean's top-rated global destination, and it's drawing people new to cruising as well as muting the impact of losing the high-yielding Cuba routes.

To call Perfect Day a 'home run' would be an understatement, as Royal Caribbean Chairman and CEO Richard Fain put it during the company's second quarter earnings call. 'It really resets the bar in the short cruise market and is designed to attract people who wouldn't otherwise be taking a cruise,' he said.

Perfect Day fit perfectly into Fain's upbeat opening remarks that had an evangelical conviction about the business. He stressed how Royal Caribbean continues to use innovation to drive change and respond to change. Adapting the product to changing tastes and trends — such as the current desire for experiences over things — makes the demand curve for cruising highly elastic.

'The industry has created better mousetraps and the world is beating a path to our door,' Fain said.

Instead of fretting about overcapacity, he stressed stimulating demand to keep a supply-demand balance.

'Overcapacity implies there is a fixed amount of demand,' Fain said, but in fact it's the opposite: A fixed amount of capacity and a very elastic demand scenario. He maintained the cruise business thrives by creating demand, not limiting supply.

As for talk of recession, 'The only time in my career when I recalled the predictions being more negative was two years ago,' the RCL chief told analysts. A recession never transpired, and the past couple years have seen consistent demand and yield growth.

There will be downturns, and 'no one is recession-proof,' Fain said, adding he thinks the industry has features that make it 'recession-resistant.' Those include value for money and moveable assets.

Circling back to the Caribbean, CFO Liberty said Caribbean and China sailings contributed the most to RCL's second quarter beat.

The Caribbean makes up a smaller share of deployment in the third and fourth quarters — just under 50%. However, Liberty said 'a lot more guests' will be going to CocoCay as the destination ramps up, and pricing for itineraries with Perfect Day is consistently outpacing expectations, while the island's extra-charge experiences lift on-board spending.

'It competes very well with Orlando,' said Michael Bayley, president and CEO, Royal Caribbean International. Some 40% of passengers on short sailings are new to cruising and short Caribbean jaunts comprise about 20% of the American cruise market, he said.

One of the company's Cuba ships has been put on CocoCay itineraries and the other will go to New Orleans next year.

Curated experiences that can manage volume

Bayley wasn't ready to announce anything. But the company has always planned to expand the concept to five places, and Labadee in the Caribbean has been specifically mentioned. Plus, the new Holistica joint venture plays into destination development.

'This idea of really curated, outstanding destination experiences that can manage volume is the direction we're headed in,' Bayley said.

A futher stroke helping the Caribbean's performance was updating the ships that operate short sailings as part of the $1bn 'Royal Amplified' program.