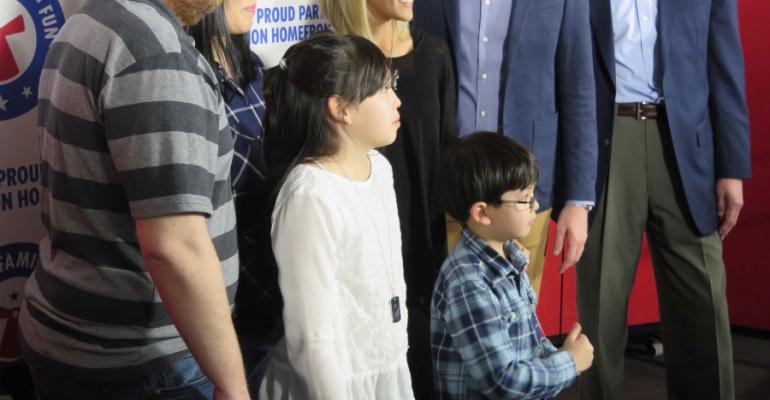 US military veteran Phillip Vaughn, wounded during his service in Afghanistan, and his family got to meet superstar singer Carrie Underwood during her concert tour stop in Washington, DC, Thursday night. The seven-time Grammy winner invited the Vaughns to a special pierside performance she'll give for veterans during Carnival Vista's stateside debut in New York on Nov. 4.

'Country music has always been about family. It seemed like a great opportunity to support veterans,' Underwood said of her involvement with the program. She's meeting veteran families at 10 cities along The Storyteller Tour.

'I meet really cool people,' Underwood said. Before her show Thursday night, she thanked Vaughn for his service and expressed appreciation for the contributions of military families. The singer also said she's excited about getting to see the new Carnival Vista and perform for the veterans there.

'A lot of songs in my repertoire military famlies can related to. One is "See You Again." It's a cool experience to hear how my music can impact them,' Underwood said.

Vaughn, who turned 31 on Thursday, and his family were also invited on a week-long cruise, courtesy of Carnival. He said his family, including wife Sun, daughter Tara, 9, and son, Jeremy, 6, have never had a vacation.

A 12-year military veteran, Vaughn served in Korea, Iraq and Afghanistan (two tours), where he was seriously injured by shrapnel when his tent was bombed three years ago. He credited Operation Homefront with helping him get back on his feet and make the transition to civilian life. 'Now, because of it, I'm better prepared for life after the military,' he said.

Butch Begovich, manager, entertainment experience for Carnival, was on hand to meet the Vaughns and surprise them with the free cruise.

'Carnival carries more military families than any other cruise line so it's natural we would support Operation Homefront,' Begovich told Seatrade Cruise News. He added that the new Carnival Vista will be the line's most family-friendly ship to date.

As part of the 'Honor. Family. Fun.' program, commemorative dog tags will be available for purchase at merchandise stands at all Storyteller Tour stops and on board Carnival ships, with proceeds going to Operation Homefront.

Carnival is also launching a new shipboard military appreciation program. Each ship will host a special event to recognize active and retired military personnel and their families that will kick off with a welcome video featuring Underwood.