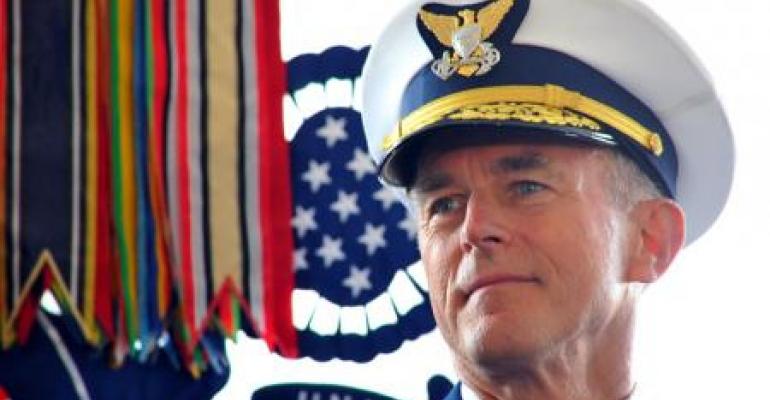 Adm. Paul F. Zukunft assumed command as the 25th commandant of the US Coast Guard Friday, relieving Adm. Bob Papp during a military ceremony at the Douglas A. Munro Coast Guard Headquarters Building.

'Adm. Papp’s leadership and resolve have left an indelible mark on the service,' Zukunft said. 'The Coast Guard is more proficient, more capable and more resilient due to his contributions and I wish him fair winds and following seas.'

Zukunft reports to Coast Guard Headquarters from Alameda, Calif., where he served as the Coast Guard Pacific Area commander since 2012. In this capacity, he was the operational commander for all USCG missions from the Rocky Mountains west to the east coast of Africa.

Zukunft will lead the largest component of the Department of Homeland Security, comprised of 41,700 active duty, 7,800 reserve and 8,300 civilian personnel as well as more 31,000 volunteer Coast Guard auxiliarists.

'I thank Secretary Johnson for the personal recognition, but it is the men and women of the Coast Guard who deserve credit for all that we have accomplished over the past four years,' Papp said.

Papp became the 24th commandant on May 25, 2010. Under his leadership USCG focused on proficiency, expanding family programs for service members and recapitalizing aging assets.

Additionally, Papp worked to secure funding for completion of the National Security Cutter program of record, the acquisition of new Fast Response Cutters and initial funding for the Offshore Patrol Cutter. He also oversaw the restoration of the nation’s only heavy icebreaker.

Papp led the service’s efforts to respond to the Deepwater Horizon oil spill and directed the roll out of the Coast Guard Arctic Strategy, the first in government to further President Obama's National Strategy for the Arctic.