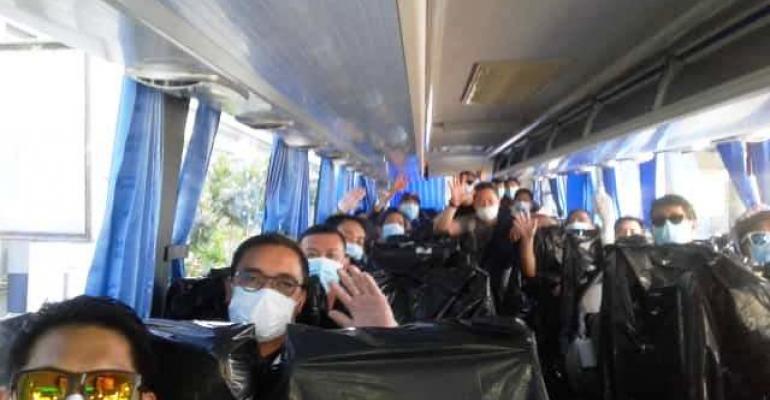 Sharp Crew Management participated in the complex repatriation of more than 8,000 cruise line crew members from throughout the world, and efforts continue to get more home.

Two further charter flights from the US have been approved but, as a result of this week’s closure of the main airport in Manila, these have now been put on hold. Storey expects to be able to bring in these flights around mid-month, raising the total of repatriated crew to around 9,000.

Currently almost 2,000 crew from Visayas and Mindanao are stuck in Manila, unable to get to their provinces. The Philippines' Maritime Industry Authority and Overseas Workers Welfare Administration had organized ferries to take them to Cebu, IloIlo, Bacolod and other places in the south but that plan was suspended indefinitely.

Singapore- and Manila-based CF Sharp has been dealing with quarantines and fast-changing protocols, including finding hotel rooms in Manila for arriving crew at a time when most hotels were closed in Manila's lockdown. Of the 8,000 repatriated crew, almost 6,000 have now been able to proceed home after completing their 14-day quarantine. Some then needed to undertake another 14-day community quarantine, but most were able to carry out a 14-day self-quarantine at home.

The Philippines Department of Health and Bureau of Quarantine have helped the repatriation efforts. The procedure may now speed up as national guidelines have been amended to require all crew to undergo RT-PCR swab testing on arrival. Those who test negative will be able to forgo the 14-day quarantine in Manila and can proceed home for community or home quarantine.

When cruising resumes, Storey predicts further challenges will need to be overcome. 'From what we know at this point, cruise vessels may start operating from European waters first. This means that a large number of crew will have to obtain Schengen visas. For now all embassies are also closed, so there isn’t much we can do to prepare,' he said.