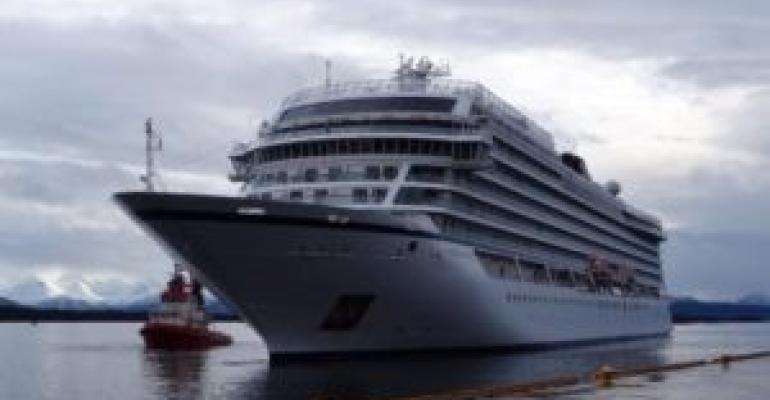 Viking Sky at Molde, where the entire community pitched in to help the stricken ship

Viking Sky came within a ship’s length of grounding during a raging storm off the coast of Norway last March following a blackout caused by low lubricating oil in the diesel generators.

The Viking Cruises ship was near Hustadvika when all three of its operating engines shut down, causing a blackout and loss of propulsion.

An interim report from the Accident Investigation Board Norway found that lubricating oil levels in the engines were maintained at 28% to 40% capacity, well below MAN Diesels & Turbo’s recommendation to maintain them at 68% to 75% capacity.

‘The diesel generators shut down as a result of the loss of lubricating oil suction due to low sump tank levels, combined with pitching and rolling,’ the report said.

Shortly after the incident, a preliminary investigation had suggested the heavy seas ‘probably caused movements in the tanks so large that the supply to the lubricating oil pumps stopped.’

The captain broadcast a mayday signal and both anchors were dropped but they did not hold. Viking Sky continued to drift toward shore. The emergency alarm was sounded to muster passengers and crew.

The ship was carrying 915 passengers and 458 crew.

Within 30 seconds of the blackout, the emergency diesel generator started and powered the emergency switchboard. The engineers transferred lubricating oil into the three operational engines and eventually were able to restart them but had to continuously balance the electrical load manually. The vessel was maneuvered towards open waters, still with both anchors lowered.

Investigators estimated Viking Sky came within a ship’s length of grounding, having passed over or in immediate proximity to 10-meter shoals before propulsion could be restored.

The Southern Norway Joint Rescue Coordination Center launched a major rescue operation to evacuate passengers, with the first helicopter arriving within about 40 minutes. Passengers were evacuated by helicopter until the morning. All told, a reported 479 evacuated passengers had been received at the emergency center ashore.

The Accident Investigation Board Norway recommended vessel owners and operators ensure engine lubricating oil tank levels are maintained in accordance with engine manufacturers’ instructions and topped up in the event of poor weather being forecast.

The interim report is here.