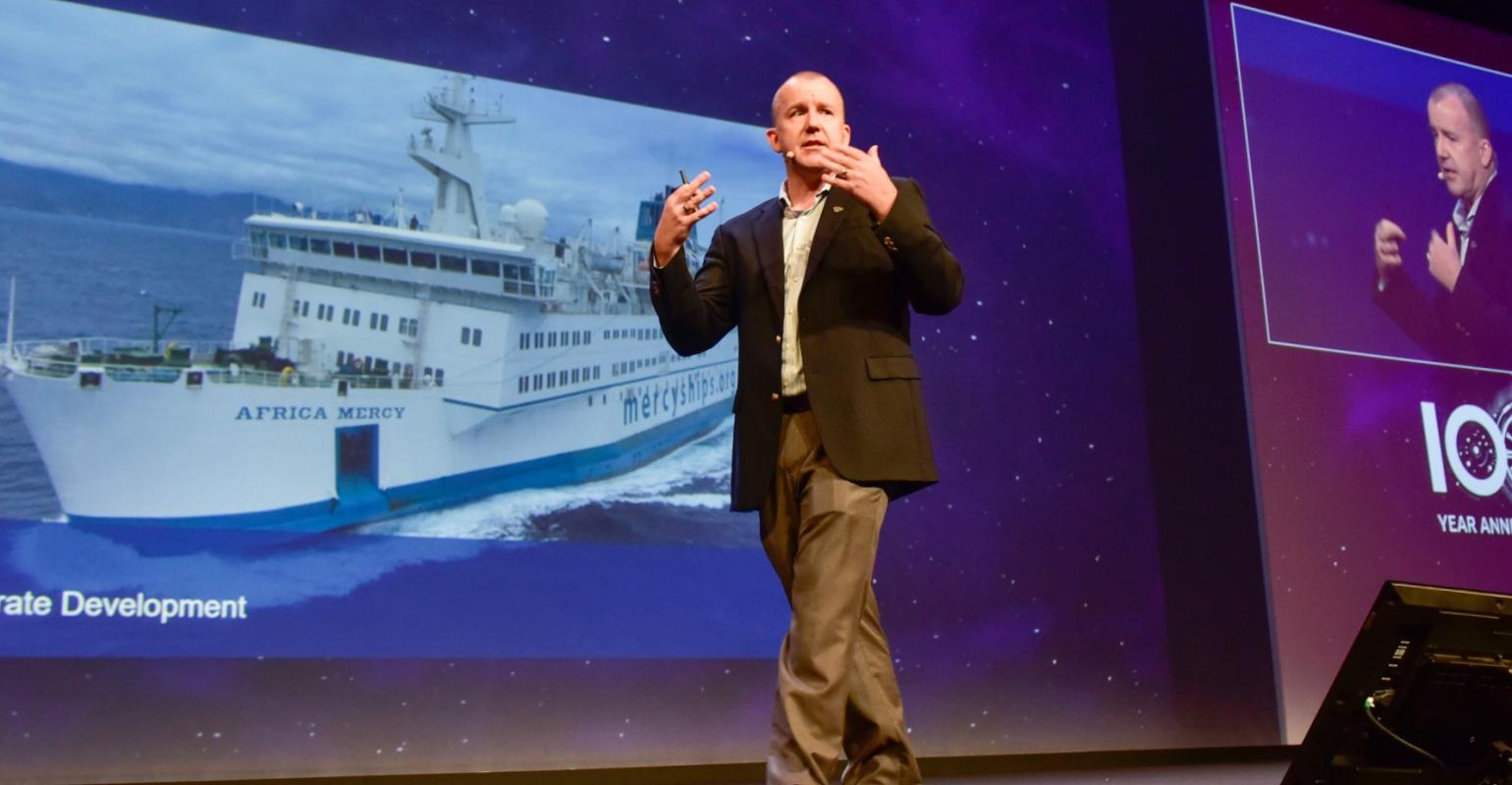 Russ Holmes is a natural leader and a motivational speaker, according to Mercy Ships founder Don Stephens, Here, Holmes presents to a corporate group
After a long career with Mercy Ships that began as a volunteer and culminated in directing corporate development including cruise industry partnerships, Russ Holmes is moving on.

Mercy Ships' mission is providing free, life-changing surgeries to people in some of the world's neediest countries. Holmes supported this by building staff in multiple countries to engage with more than 350 companies that provide funding, services, product support and expertise.

'It's been a phenomenal honor to make such a difference in the world,' Holmes said.

'Russ is a natural leader and a motivational speaker with extensive experience of working across cultures and motivating teams to achieve outstanding results in support of the organization's strategic plan,' Mercy Ships founder Don Stephens said. 'He is also gifted in cultivating new strategic partnerships, developing global branding/marketing initiatives and overseeing operational aspects of the organization.'

Holmes is proudest of building strong partnerships with Cruise Lines International Association that led to Mercy Ships becoming CLIA's charity of choice in 2015 and with Seatrade/Informa, which designated it official nonprofit partner in 2017.

'We could never pay for that exposure,' he said. 'To be featured at Seatrade's State of the Industry [keynote address] and at CLIA events has helped bring about transformational growth. This really helped Mercy Ships become a household name in the industry.'

He's also proud that this is the 10th year of support from the MSC Group/MSC Foundation, spanning expertise, logistics and cruise passenger donations.

'Getting to work with Russ over the last few years has been a privilege,' said Chiara Giorgi, global brand & event director, Seatrade Cruise Events. 'His drive to make things better, his out-of-the box approach and his positivity will all be greatly missed. I am grateful for the partnership that we have built together between Seatrade Cruise and Mercy Ships, and look forward to continuing the relationship.'

In whatever his next role will be, Holmes again seeks to make an impact and add value. Having lived on ships for eight years, he loves the sea and his family plans to relocate to Florida from Texas next year.

'My passion is the maritime industry, whether nonprofit or profit. I've built up many connections with cruise lines, suppliers, ports and destinations and have a strong background in business development. I'd like to help the industry get back to running, post-pandemic,' he said.

His fortés are business development, global branding and marketing. He's also helped Fortune 500 companies develop their corporate social responsibility programs and would enjoy building a CSR program for a business.

'I've had the pleasure of working with the healthcare industry, the tech industry and the maritime industry. Of these, the one where I've connected to most in terms of personal relationships is maritime,' Holmes said. He appreciates how, in cruising, 'Everyone competes fiercely on the corporate side but when there's a crisis, everyone pulls together to address it,' citing the joint work on COVID-19 protocols.

Holmes' association with Mercy Ships began in 1993 when he volunteered for what he thought would be a five-month stint aboard its Anatasis in Senegal. There, he saw lives transformed.

The five months stretched into five years, which he spent full-time on board, leaving for just four weeks' vacation each year to go home to northern England and raise support for his upkeep. (Mercy Ships' volunteers pay roughly $700 a month for room and board.)

During one stint in Ghana, Holmes was helping with crowd control when thousands of people turned up for a screening by Mercy Ships' doctors. At the front of the queue was a 5-year-old girl with her father. They'd waited five days on that spot after traveling three days across the country to get there.

One side of little Marianne's face was eaten away by noma, an infection that plagues the developing world. Her mouth was open to the ear, a shocking sight.

Weeks later, Holmes met Marianne again, bandages off, playing on the deck of the ship.

'She looked at me and smiled,' he said. 'Before, she couldn't smile because she didn't have a mouth. That smile will stay with me for the rest of my life.'

After marrying a Mercy Ships' volunteer from South Africa and starting a family, Holmes returned to the charity in 2003, working in procurement and logistics and then as operations director while Africa Mercy, which would become the world's largest charity hospital ship, underwent an extensive, multi-year refit at Cammell Laird in Newcastle.

In 2007, the family relocated to Mercy Ships' international support center in east Texas where Holmes became director of international procurement and logistics, overseeing key vendor/partner relationships, product sourcing and logistics to resupply the ship in Africa.

Global Mercy on the horizon

Having identified areas for growth, he worked with the senior leadership to create the charity's corporate development team, supporting Mercy Ships' significant scale-up plans. Programming increased while the charity designed and built the soon-to-be-deployed Global Mercy. Joining Africa Mercy, the new vessel will have six operating rooms compared to the five on the other ship, and 199 hospital beds, up from 78. To support medical capacity-building in host countries, Global Mercy houses a simulation lab for training and mentoring in surgical skills.

As Don Stephens noted, the corporate development team under Holmes' leadership has built many key partnerships with some of the world's largest brands that will benefit Mercy Ships and those it serves for years to come.