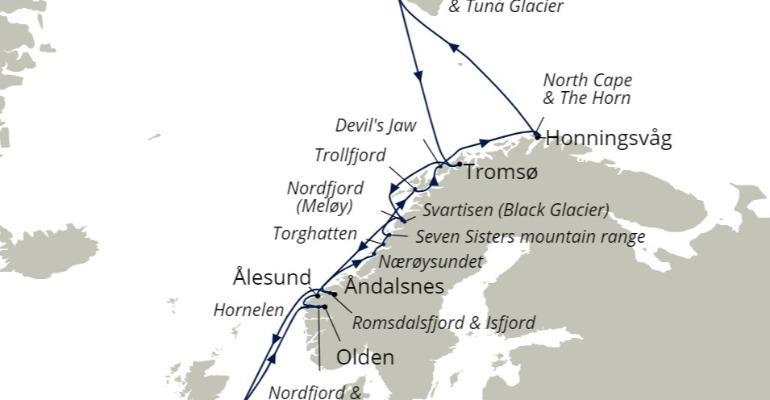 Balmoral will sail on a 15-night cruise that includes the Norwegian Archipelago of Svalbard
Canada in the Fall and Rugged and Remote Spitsbergen sailings on board Borealis and Balmoral, respectively, have been announced by Fred. Olsen Cruise Lines as part of its 2022 programme.

Before returning to Newcastle, passengers will experience Nordfjord and Innvikfjord, Nærøysundet, Torghatten and the Seven Sisters mountain range, as well asTrollfjord and Devil’s Jaw, North Cape and The Horn, Nordenskiöldbreen, Tempelfjorden and Tuna Glacier.

The crossing of the Arctic Circle to witness the Midnight Sun, Black Glacier in Svartisen, and Romsdalfjorden and Isfjord are added highlights.

‘In Spitsbergen, Balmoral will really come into her own, with her smaller size allowing us to offer unspoilt views of many natural wonders, from sailing alongside glaciers and down narrow fjords, to the destinations themselves’, commented Clare Ward, director of product and customer service, Fred. Olsen Cruise Lines.

Canada in the Fall

The 19-night cruise includes the Saguenay River and visits to national parks, forests and trails.

So added Ward, ‘From Sydney, guests can follow the Cabot Trail and take in the Cape Breton Highlands, explore the Forillon National Park in Gaspé, and, in Quebec, immerse themselves in the autumnal colours from Jacques-Cartier National Park.’

Passengers who book before December 31, 2020 will receive up to £200 per person to spend on board Balmoral and up to £250 while aboard Borealis.