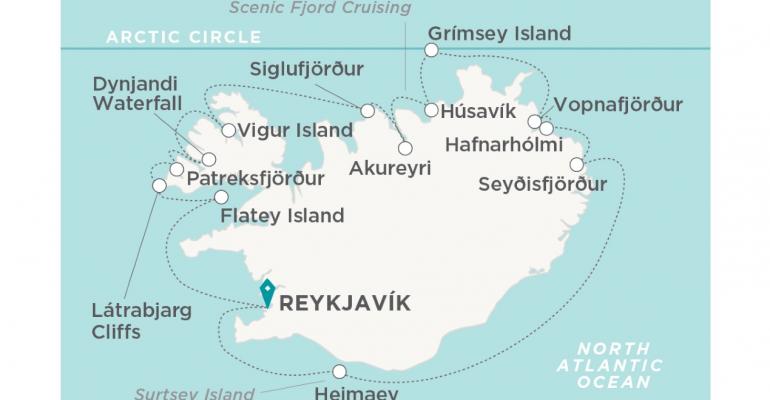 Iceland is one of the few northern locales that's alraedy given the green light to expedition cruising.

'We are grateful to Þórdís Kolbrún Reykfjörð Gylfadóttir, minister of tourism, industry and innovation of Iceland, and her team for their partnership and collaboration as we begin this new chapter of luxury expedition cruising,'

Crystal Endeavor is to sail round-trip Reykjavík, affording travelers convenient air options, six hours from New York City, three hours from London and with frequent nonstop flights from many major cities in the US and Europe.

The spacious 20,200gt ship can carry 200 passengers with a one-to-one crew to guest ratio. It is built to Polar Class 6 standard and recently completed sea trials off Germany as final outfitting takes place at MV Werften in Stralsund.

According to Capt. Thomas Larsen, who will helm the ship: 'The design and building caliber of Crystal Endeavor is outstanding. Contracted for max speed of 19.7 knots, she delivered an actual max speed of 20.5 knots during the sea trial, exceeding all performance expectations and standards with little to no vibration even during "crash stop" tests. This means a comfortable, enjoyable experience for guests even in unpredictable weather conditions.'

Crystal Endeavor is equipped to connect to shore power while in port, has several water treatment systems and will clean exhaust emissions through a selective catalytic teductant system.

For added safety, lifeboats and rafts are built to accommodate 600 people – 50% more than needed for the approximately 400 total guests and crew on board.

The ship is outfitted with dynamic positioning and has the latest underwater sonar technology, providing real-time 3D images of the terrain and activity along the route up to 1,000 meters ahead of the vessel and to a depth of up to 50 meters, with a mapping range up to eight times the water’s depth.

Among the Iceland itinerary highlights are overnight stays in Reykjavík and Akureyri, a call at Grímsey Island and crossing the Arctic Circle, the unspoiled Arnarfjörður fjord, cascading Dynjandi Waterfall and famous geothermal springs of Vopnafjörđur and Seyđisfjörđur.

The cruises – which sail through peak whale migration in the region July through mid-September – also visit Patreksfjörđur and pink- and red-sand Rauðasandur Beach, Iceland’s whale-watching capital of Húsavík and Heimaey, home to a beluga whale sanctuary. Birder havens include 'puffin paradise' Hafnarhólmi; Flatey Island, a floating nature preserve that is home to thousands of puffins, eider ducks, black guillemots and Arctic terns; Vigur and the Látrabjarg Cliffs, where thousands more puffins reside.

Passengers will have the opportunity to stand on the Bridge Between Two Continents, which spans the mid-Atlantic rift and connects North America with Eurasia. Two of Iceland’s three UNESCO World Heritage Sites are also featured: Þingvellir National Park and sailing around volcanic Surtsey Island.

A pre- and post-cruise luxury hotel program is available at the Hotel Borg in Reykjavík with the option of one-, two- or three-night stays, with inclusive transfers between Crystal Endeavor, the hotel and the airport and all taxes and resort fees.

Depending on the itinerary, the expedition team will include biologists, marine biologists, naturalists, historians, ornithologists, geologist, ecologists and others.

Enhancing the experience, a Shotover gimbal camera system will be installed on the ship’s mast to zoom in for closer views of wildlife and other points of interest in real time. The views will be streamed directly on the HD TVs throughout the ship, in public areas and suites and on the large 65-inch screens in Palm Court and 86- inch screens in the Expedition Lounge.

The Cove will feature a video wall, with a massive 218-inch-wide center screen and two 145- inch-wide side screens. The camera will shoot 4K video with remote control locations in the Palm Court and in the Expedition Lounge that will offer interactive activity between the camera operator and guests.

Ocean Robotics’ Remote Operated Vehicle Aegir 50 will roam to depths of nearly 2,000 feet, capturing data and imagery that will also be broadcast across the ship. Drone footage will also be captured, offering birds-eye views of the surrounding regions.

As Crystal announced in February, travelers must be fully inoculated with a COVID-19 vaccine at least 14 days prior to embarking any of its ships. This new requirement is in addition to measures, including COVID-19 tests for both guests and crew, reduced capacity, social distancing, a 'nimble' mask policy, rigorous cleaning procedures, isolation rooms in case of illness and health screening questionnaires.

Cruise fares start at $13,999 per person, including up to double 'Book Now Savings' at $3,000 for a limited time. Travelers will receive a $300 per person shipboard credit, Crystal Society Savings will double to 5%, new-to-Crystal guests will save 2.5% and solo fares start at just 150 percent. Deposits are reduced, with final payment deadline extended to 60 days before first date of service.