New cruise ship pier in Tarragona to be operational in September 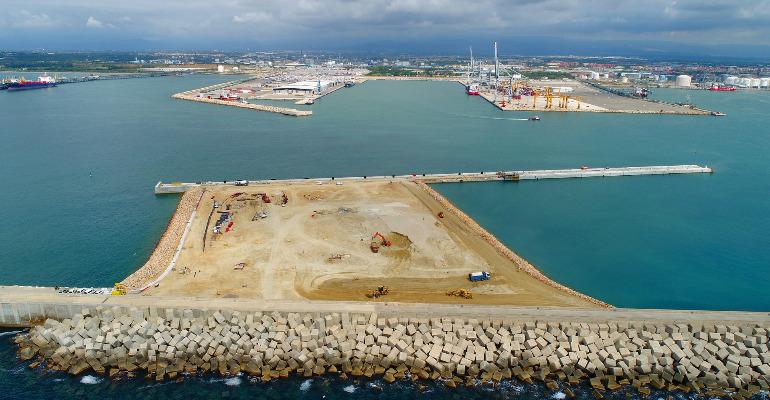 Cruise ships and large vessels will now have a new place to berth in Tarragona, the new Balears pier in the Port of Tarragona.

Construction of the pier began last year. Soon, it will be ready to begin receiving ships, possibly in September. Its 700 linear metres of berthing and total surface area of four hectares means it will be able to accommodate up to four large cruise ships at a time. This represents an important step forward for cruise ship traffic in Tarragona in terms of quantity as well as quality.

The amount invested in the project was 27 million euros and construction of the dock took place over five phases. The fifth phase has already begun with the construction of a reinforced concrete beam to ensure the wharf is correctly aligned. The 200-tonne bollards will be installed on this to moor cruise ships.

The construction of the new pier is directly related to the arrival of more and larger cruise ships, but this is not its only raison d'être. The Port of Tarragona also wants to expand traffic in the future and the new quay is a key part of this. The aim is for new companies to be able to operate in the terminal.

In fact, the Tarragona Port Authority is already working on drafting the clauses to put the concession for the new quay up for tender. It will be a public enterprise with a concession of 10-12 years. The public tender process will likely start towards the end of the year. According to sources with the port, some companies have already shown interest, which is beneficial for the Tarragona project since they could attract international traffic in the future. All this demonstrates the port's great potential in the cruise and traffic sector.

Investing to reclaim our planet: 2030 goal

Construction of the new Balears pier was accomplished adhering to all environmental measures. It is also designed to be electrically powered when demand in the sector requires this. Sustainability is at the core of the Port of Tarragona’s development as an institution and in its port projects. It recently expanded its current Sustainability Plan – Agenda 2030 to combat climate change. The port has slated 1.5 million euros to reduce emissions, increase energy efficiency and reduce energy consumption by 44%.

The challenge of reclaiming our planet is an enormous one, but the Port of Tarragona has taken on an ambitious Sustainability Plan including 25 goals and 88 actions that will make their small but significant contribution towards a mission everyone stands to benefit from. The project was initially presented in 2020, but in 2021 was extended to include two new goals and six new actions. All of this is grouped into three well-defined areas: environmental sustainability, sustainable growth and social commitment. The aim is to achieve the plan’s goals before the start of the next decade. So the pace is accelerating.

Meanwhile, the port is working to increase prosperity through the creation of new alliances in sustainable development and commitment to the environment, such as a project to use hydrogen as an alternative fuel, and an investment of 1.5 million euros to improve energy efficiency and reduce energy consumption and CO2 emissions.