'Amplified' Navigator of the Seas has $115m of new features 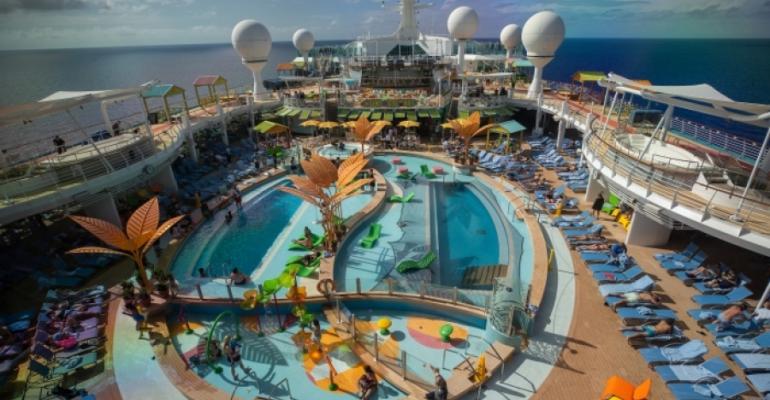 The new resort-style pool added a Splash Pad for tots and dining options Johnny Rockets Express and Mexican 'street fare' at El Loco Fresh
Navigator of the Seas arrived to its new year-round home, Miami, with $115m of next-level features for all ages.

They include The Blaster, Royal Caribbean's first aqua coaster; Riptide, a head-first, mat racer waterslide; and a reimagined poolscape infused with Caribbean vibes. To Dry For is the first standalone blow-dry bar at sea. New dining and drinking options include Hooked Seafood, Jamie's Italian, The Bamboo Room, Playmakers Sports Bar & Arcade and The Lime and Coconut. A laser tag game and escape room were also added.

Beginning March 1, Navigator will sail five- and nine-night Caribbean cruises through May. The ship will then set course for The Bahamas with three-night weekend and four-night weekday getaways, including visits to the amped-up private island Perfect Day at CocoCay.

Aqua coaster The Blaster propels thrill-seekers through more than 800 feet of dips, drops and straightaways that extend over the side of the ship. Head-first mat racer Riptide has an exhilarating finish through a translucent tube for endless ocean views. The new resort-style pool added a Splash Pad for tots and dining options Johnny Rockets Express and Mexican 'street fare' at El Loco Fresh.

The Lime and Coconut is a three-level signature bar that offers a variety of libations, a 'rooftop' deck and live music.

Besides blowouts, hairstyling and other services, To Dry For serves a selection of wines and champagnes.

'Independence and Mariner of the Seas, the first two modernized ships in our "Royal Amplified" program, have quickly become standout hits, and Navigator builds on this momentum with a combination of new, exciting features and signature Royal Caribbean offerings that will surprise and delight guests cruising with us for the first time and those who have vacationed with us before,' said Michael Bayley, president and CEO, Royal Caribbean International.

Battle for Planet Z is an epic glow-in-the-dark laser tag battle for the last planet in the galaxy, while Royal Escape Room: The Observatorium is a team challenge to solve mind-bending puzzles before time runs out.

Ten ships to be amped up

Navigator of the Seas is the third ship to be reimagined as part of the Royal Amplified modernization program, an investment of more than $1bn (up from the originally announced $900m). The effort spans 10 ships in four years and touches every facet of the guest experience.

Converted Silver Wind to debut in May, not for Antarctica
Nov 19, 2021