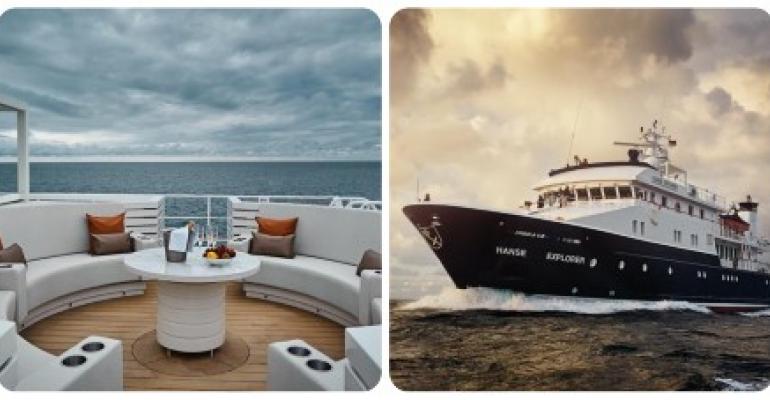 EYOS Expeditions announced new departures to Antarctica and the South Pacific on the redesigned super-yacht Hanse Explorer in 2022/23.

Following a multimillion-dollar redesign by Partnership Design and AROS Marine, the seven-cabin Hanse Explorer features a rugged, steel-hulled exterior with the highest commercial ice classification, and a newly refined interior with a distinctly modern style. With an indoor-outdoor design, traditional dark paneling and leather furnishings have been swapped for light woods and a neutral palette of creams, whites and chromed silvers, complemented with nautical navy blue touches.

Expanses of glass sliding doors flood spaces with light to allow for optimal wildlife viewing during expeditions, and cabana-style Balinese beds were added to provide the opportunity to sleep under the stars. New amenities also include a saltwater Jacuzzi and sauna as well as a cocktail area with Bose sound system.

Once strictly a polar yacht, Hanse Explorer is now equally equipped to explore both the tropics and polar regions. A pair of zero-speed stabilizers were installed.

Passengers also have access to kayaks, standup paddleboards, diving equipment and two Zodiacs to view landscapes up close and make remote beach landings. A dive center will also be added that caters to beginners and advanced divers.

Expeditions are guided by a team of experts with decades of experience and in-depth knowledge of these regions.

Hanse Explorer is available for private charters with EYOS in Antarctica until February 2022. The super-yacht will then venture to warmer climates to spend April through October exploring the remote island groups of the Tuamotus, the Society Islands and the Marquesas as well as the Line and Phoenix and Cook islands. It will return to Antarctica for the 2022/23 season, from December to March.

Pool deck and new neighbourhood highlight Royal Caribbean’s Wonder of the Seas
May 09, 2022