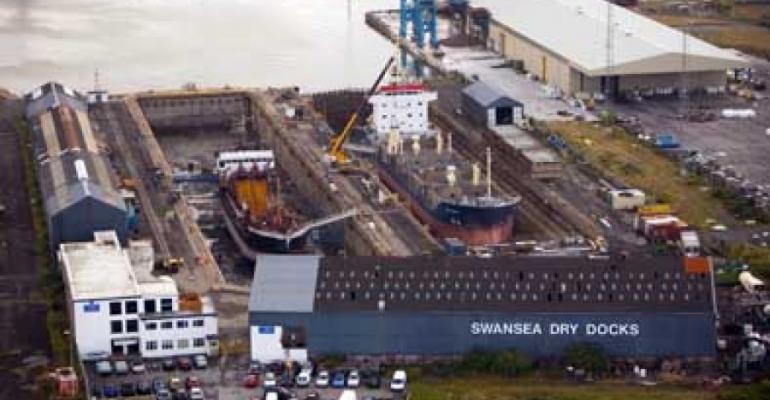 Harris Pye Group has failed in its attempt to renew the necessary licence to develop and expand the Swansea Dry Docks for use for refurbishment and repair of a wide range of types and sizes of vessels.

'We are naturally extremely disappointed not only for ourselves, but for a potential workforce of up to two hundred people and 50/60 trainees per year who would have graduated from our Training School,' says Mark Prendergast, managing director of the Harris Pye Group.

In late 2009 Saga Shipping selected Swansea Dry Dock to undertake a major refit of its then newly purchased ship, the former Astoria, into Saga Pearl II.

It was the first time in over 10 years that Swansea had handled such a significant ship refit and entailed the facility itself being re-opened and refurbished to carry out the work. The project provided some 300 jobs over a three-month period, enabling SDD to compete for future business.

'We would like to thank all who supported our bid, and those who worked with us in the Docks during late 2009 and throughout 2010. They can take pride in the work they did on Saga Pearl II and on the other vessels/projects that have made use of the two dry docks,' Prendergast added.

Having invested some £500,000 on the Dry Docks, with plans for another £2m to bring the facility up to international standards, Harris Pye also had plans to move the global headquarters of its £100m group to Swansea which would have seen a further investment of £5m.

'Our global business is developing rapidly; and although we are deeply saddened by this decision, we need now to put this disappointment behind us, and move forward with drive and enthusiasm,” says Prendergast.

In addition to its UK HQ Harris Pye Group also has main stations in Dubai and Singapore; and offices and repair facilities in Scandinavia, Portugal, Brazil, Bahrain, Indonesia, Malaysia, Japan, Sharjah and Australia, and is active in many marine and industrial sectors.