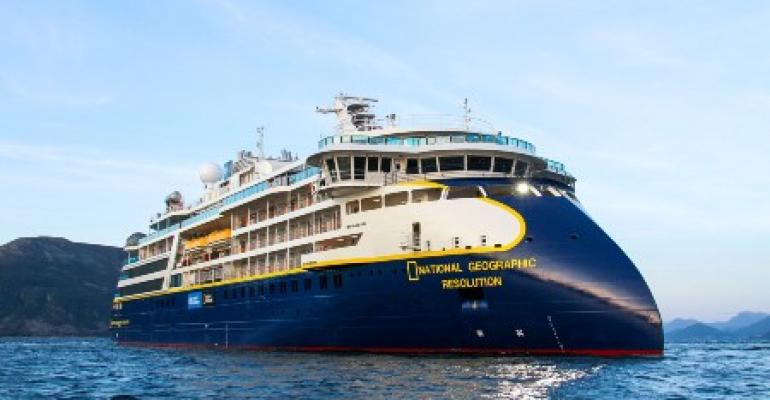 The 126-passenger vessel, with its distinctive X-BOW, is built to Polar Class 5 standard

The 126-passenger vessel, with its distinctive Ulstein Designs-patented X-BOW, is built to Polar Class 5 standard. It is the sister of National Geographic Endurance, which entered service in Iceland in July.

'With the National Geographic Resolution and her sister ship, National Geographic Endurance, we have the elusive result of expedition excellence and elegance exquisitely combined,' said Sven Lindblad, founder and co-chair of Lindblad. 'It is also remarkable that her delivery was on time during this difficult period.'

He recognized an 'extraordinary team of engineers, designers and crew from Lindblad, Ulstein, Partnership Design and Crist,' and said 'their collective talent and dedication are evident in every aspect of National Geographic Resolution.'

'It has been an amazing experience cooperating with Lindblad on this splendid new polar vessel,' Ulstein CEO Cathrine Kristiseter said. ' ... We are grateful for the trust that Lindblad has placed in Ulstein, and we are eager to receive the feedback from the Resolution’s first adventures.'

The first polar voyage is set for Nov. 17 to Antarctica, South Georgia and the Falkland Islands.