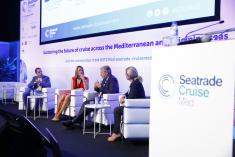 Cryptocurrency and immersive experiences define river cruising at Seatrade Cruise Global
May 05, 2022
American Queen Voyages is branching into the expedition cruise sector, Variety Cruises is aiming towards cryptocurrency and Windstar Cruises has successfully concluded an ambitious stretching project across its fleet.

Aurora Expeditions' new CEO to take up post in June
Apr 27, 2022
Michael Heath, who has replaced Monique Ponfoort as CEO for Aurora Expeditions, will take up his new position on June 1.
Load More