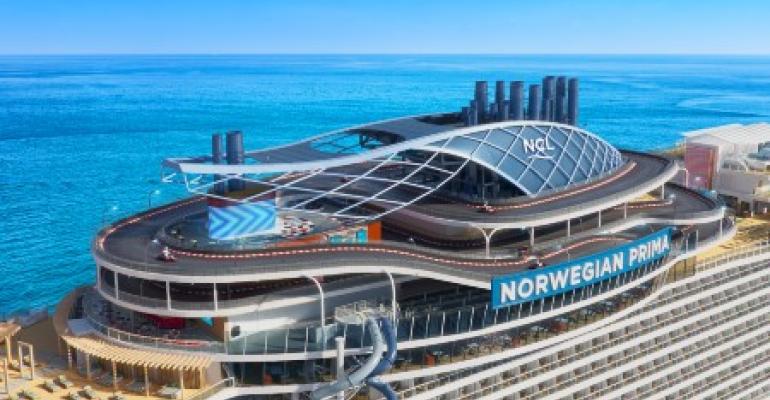 Norwegian Prima will headline a Donna Summer musical that morphs into a disco party plus the largest racetrack at sea. The ship will sail from Galveston in winter 2023/24.

The first in Norwegian Cruise Line's new Prima class will feature the Tony Award-nominated 'Summer: The Donna Summer Musical' along with a number of new designs and experiences, including a venue that transforms from a three-story theater into a Vegas-style nightclub, freefall drop dry slides and the largest racetrack at sea.

From the production team that brought 'Jersey Boys' with current residence on Norwegian Bliss comes 'Summer: The Donna Summer Musical' that chronicles the singer's meteoric rise from young starlet to the Queen of Disco with a score of more than 20 hits including 'Bad Girls,' 'Last Dance' and 'Hot Stuff.' In the 75-minute immersive production, the theater transforms into a disco and passengers can become part of the show.

Norwegian Prima’s headline acts and new on-board experiences will take center stage in the Prima Theater, a three-story venue designed to seamlessly convert from a performance stage into an expansive dance floor. It will feature a customizable seating layout and a moving LED screen that lowers from the ceiling and is nearly half the size of the venue.

Norwegian Prima's interactive 'Live on NCL' game shows will allow the audience to be part of the action with an opportunity to win grand prizes. These immersive productions, powered by Fremantle Media, include 'The Price is Right Live on NCL,' where participants have the opportunity to spin the wheel for a chance to win big and 'Supermarket Sweep Live on NCL,' where the Prima Theater and Nightclub transforms into a grocery store with teams of contestants racing the aisles in a fast-paced game show of trivia questions, product knowledge and speed.

'Press Your Luck Live on NCL' puts players up against the big board to answer trivia questions, while 'Beat the Clock Live on NCL' is a team competition game involving hilarious challenges.

As the only cruise line to offer go-karts at sea, NCL will up the ante on Norwegian Prima with its largest and first three-level racetrack, Prima Speedway. Featuring a longer straightaway with a track stretching more than a quarter mile (1,378 feet/ 420 meters) and 22% larger than that on Norwegian Encore, the speedway will go around and through the ship's funnel with  14 nail-biting turns. Fifteen drivers can simultaneously race, reaching speeds of more than 30 mph/50 kph.

Racers can later unwind at the new Prima Speedway Bar located beneath the racetrack.

What NCL touts as the world’s first freefall dry slide puts users into a 10-story plunge reaching the highest g-forces of any cruise line with more gs than an accelerating F1 race car. The Drop takes a competitive turn with dueling dry slides The Rush.

Additional activities include The Bull’s Eye, an elevated twist on darts featuring a sophisticated video tracking system that automatically calculates each player's score and even offers instant game replays. And NCL will introduce Tee Time, a supercharged version of minigolf with nine interactive holes set amid a Vegas-style backdrop and a chance to win prizes.

Norwegian Prima's Aqua Park and Main Pool area will feature a Tidal Wave waterslide featuring gushing surfs where passengers can ride an innertube to catch the perfect wave. For relaxation, there are two infinity hot tubs, or people can go under the area’s cascading water feature.

The Improv at Sea comedy club will showcase standup performances against an intellectual tongue-and-cheek 'Science of Comedy' theme.

After its August 2022 debut and wide-ranging inaugural season, Norwegian Prima will sail from Galveston for seven-day cruises during the 2023/24 winter season. The itinerary includes Costa Maya, Cozumel, NCL's Harvest Caye in Belize and Roatán (Honduras).