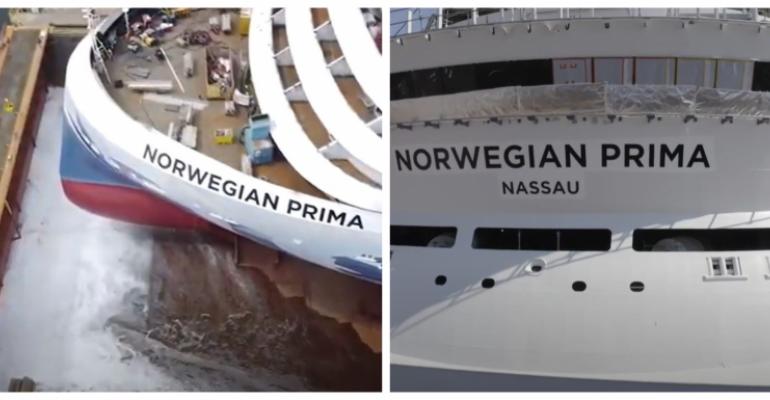 Norwegian Prima begins next part of her journey

Norwegian Prima is NCL's opening salvo in its first new class of ships in nearly a decade.

To celebrate the occasion, a commemorative coin was encased within Norwegian Prima in a traditional maritime ceremony presided over by the cruise line and shipyard executives.

The float out signifies the completion of external works and painting to Norwegian Prima, including the hull artwork designed by Italian graffiti artist Manuel Di Rita, known commonly as ‘Peeta’.

Work now continues on Norwegian Prima’s interior fittings and guest accommodations, before she is officially delivered to NCL and commences sailing in summer 2022 in North Europe before heading to the US. Through the Fall and Winter, Norwegian Prima will offer a variety of Bermuda and Caribbean cruises from New York, Galveston, Miami and Port Canaveral, including calls to Harvest Caye, the Company’s private resort destination in Belize as well as NCL’s private island, Great Stirrup Cay, in the Bahamas.

Harry Sommer, President and CEO of NCL commented: ‘Our eighteenth ship, Norwegian Prima represents an exciting new chapter for our brand and the first vessel to be delivered in our groundbreaking new Prima Class.

‘We’ve worked closely with our partners at Fincantieri to deliver a truly remarkable vessel. Their passion, skill and craftsmanship has brought to life one of the most stylish and innovative ships to ever set sail. I’m thrilled we’re now one step closer to welcoming our guests onboard in just 12 months’ time,’ Sommer concluded.

A new era for shipbuilding

He called the float out of Norwegian Prima ‘a renewed confidence in cruise and a new era for shipbuilding’.

Luigi Matarazzo, general manager merchant ships division of Fincantieri added,  ‘We are glad to celebrate not only many months of hard work, but also the true spirit of collaboration between our brands – a partnership that will lead the way for a pioneering class of ships in NCL’s Prima Class.’

At 965ft long, 142,500gt and with capacity for 3,215 guests at double occupancy, Norwegian Prima is the first of six ships in NCL’s Prima Class.