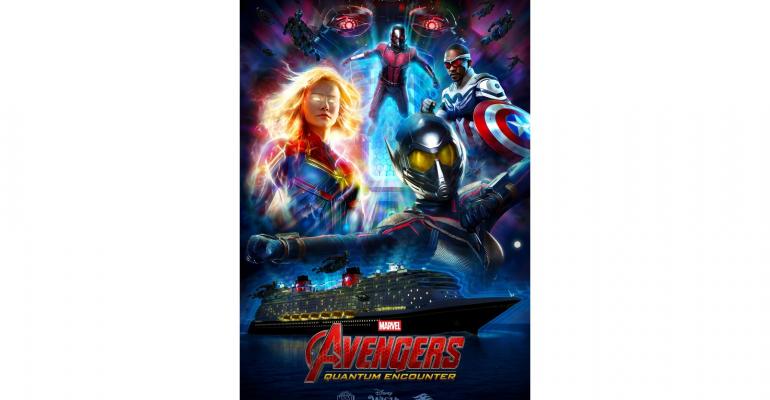 Kerry Condon will also reprise her role as the voice of F.R.I.D.A.Y., and Ross Marquand will lend his villainous vocal skills to Ultron.

'Avengers: Quantum Encounter' will be featured on screen throughout the Worlds of Marvel restaurant.

Handke said the show will follow Ant-Man and The Wasp as they host a presentation of the most powerful super hero technologies in the world, including a hands-on demonstration of the latest and greatest Pym Tech. But when Ultron turns up with an army of robot sentries to seize this technology, Ant-Man and The Wasp will need all the help they can get to save the day — calling on Captain America, Captain Marvel and even the brave diners of the Disney Wish for back-up.

Plus a surprise super hero

Handke said one more super hero, to be revealed later, will make a surprise appearance during the show.

The Worlds of Marvel restaurant will have hundreds of screens and special effects embedded throughout.

CGI of the ship's upper decks

Filming with the actors has already wrapped the post-production editing and effects are under way.

'Because most of the battle takes place on the upper decks of the ship, we are actually re-creating it in photo-realistic CGI while the real Disney Wish is still under construction,' Handke said.