Viking takes the wraps off expedition voyages to the Arctic, Antarctica and Great Lakes 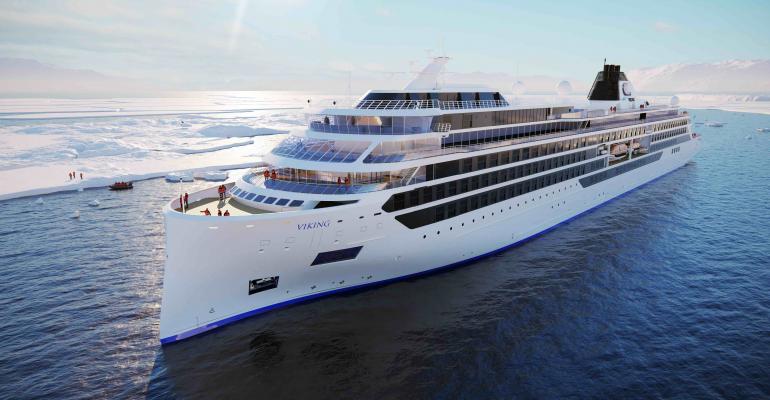 Each sleek expedition ship measures 30,150gt and will carry 378 passengers

Viking Expeditions will begin sailing in January 2022 with Viking Octantis on voyages to Antarctica and North America’s Great Lakes.

Viking Polaris will follow in August 2022, sailing to Antarctica and the Arctic.

After keeping its expedition product under wraps for many months, Viking revealed the pair of sleek 378-passenger ships that have been under construction by Fincantieri’s Vard. They’ll measure 30,150gt and stretch 205 meters/673 feet — largish for expedition vessels. But, as Viking Chairman Torstein Hagen said, that’s to ‘make exploration comfortable … One shouldn’t have to rough it on our ships.’

Viking Octantis and Viking Polaris are being built to Polar Class 6 standard and will fly the Norwegian flag, with registry in Longyearbyen, Svalbard.

The Hangar, RIBs and yellow submarines

The ships feature modern Scandinavian design and public spaces that will be familiar to Viking loyalists but are packed with novel features such as the groundbreaking rigid inflatable boats (RIBs), two 12-seat, enclosed, dual-propulsion craft that can take travelers on further-range exploration than Zodiacs.

The RIBs will launch from inside The Hangar, an enclosed, in-ship marina that enables small excursion craft to exit through multiple shell doors. An 85-foot slipway allows passengers to embark the RIBs from a flat, stable inside surface.

Each ship will have a pair of seven-person submarines — they’re yellow, Hagen noted with glee — that will not be extra-charge but included as part of the exploration product.

No helicopters, though. Hagen said they’re noisy and disruptive.

Viking Octantis and Viking Polaris will also be working research vessels with a team of resident scientists. Developed in consultation with Cambridge University and other academic partners, The Laboratory will support a range of research activities. It will be equipped with wet and dry laboratory facilities, a sample processing area, fume cupboard, freezer and cool storage, comprehensive microscope optics and extensive bench space for analysis-specific instruments.

The Aula and Finse Terrace

The Aula, a stunning panoramic auditorium at the stern, will provide a venue for lectures and entertainment, with floor-to-ceiling windows and 270-degree views. Adjacent to The Aula through sliding glass walls is the Finse Terrace, an outdoor lounge area with couches and warming lava rock ‘firepits.’

All cabins feature a Nordic Balcony, a sunroom that converts into an alfresco viewing platform. The floor-to-ceiling glass flush with the edge of the ship lets passengers take in the views while keeping the elements out. The top of the panoramic glass lowers to transform the room into a sheltered lookout, with an observation shelf at elbow level to stabilize binoculars or a camera.

There are six cabin categories, ranging from 222 square feet to 1,223 square feet. All have a drying closet for expedition gear.

Hagen said six inaugural season voyages were opened to booking by past guests in October and sold out. All itineraries are now available for sale.

Viking has partnered with the University of Cambridge’s Scott Polar Research Institute and is sponsoring a major endowment for scientific research into the polar regions. The institute’s scientists will undertake fieldwork on Viking’s expeditions and share their expertise with travelers.

Through a partnership with The Cornell Lab of Ornithology, bird experts will regularly sail on board. And a partnership with the National Oceanic and Atmospheric Administration will bring NOAA scientists on in the Great Lakes to conduct research on weather, climate and ecosystems.

‘Our mission is to perfect expedition voyages,’ Hagen told 400 guests including VIPs, travel partners, media and past guests during a launch event in Beverly Hills Wednesday night that also featured the christening of ocean ship Viking Jupiter by world-famous singer Sissel Kyrkjebø.

It was an enthusiastic crowd.

Michael Consoli of Cruise Planners in Atlanta, a top-producing agent for Viking, was excited about the expedition product. ‘It marries their amazing design with unmatched value,’ he said. ‘These ships will have similar cabins, finishes and amenities that Viking has on their river and ocean products while including all the things the Viking guest has learned to expect.

‘The Viking guest is going to feel right at home on these eco-friendly ships that visit the far corners of the world,’ Consoli continued. ‘I cannot wait to present this amazing product to my existing Viking clients and new adventure-seekers.’