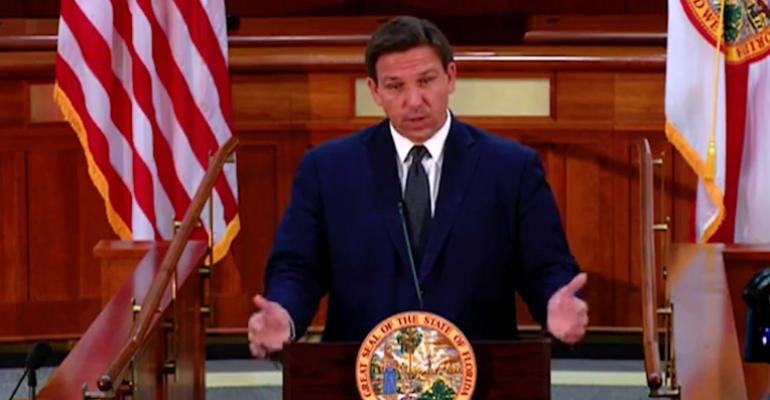 'I urge the CDC to immediately rescind this baseless no-sail order to allow Floridians in this industry to get back to work,' Gov. Ron DeSantis said
Florida Gov. Ron DeSantis called on the US Centers for Disease Control and Prevention to lift the conditional sail order during a round table with cruise line leaders at Port Canaveral Friday.

According to DeSantis, the federal government has provided guidance to all other passenger transportation modes and other industries, however it has failed to issue guidance for the cruise industry to assist in its recovery.

'The cruise industry is essential to our state’s economy and keeping it shut down until November would be devastating to the men and women who rely on the cruise lines to provide for themselves and their families,' DeSantis said. 'I urge the CDC to immediately rescind this baseless no-sail order to allow Floridians in this industry to get back to work.'

'I hope Washington is listening'

The briefing took place in Port Canaveral's new Terminal 3, the future home of Carnival Cruise Line's LNG-powered Mardi Gras. Among the cruise executives present was Carnival President Christine Duffy. She thanked the governor for his support, adding: 'I hope Washington is listening.'

According to DeSantis, 'If there is one thing we’ve learned over the past year, it’s that lockdowns don’t work, and Floridians deserve the right to earn a living.'

That has come at a cost, though. Florida has reported more than 2m COVID-19 cases, one of the highest in the nation. Last weekend Miami Beach imposed a curfew and declared a state of emergency after tens of thousands of revelers descended following Florida's lifting of restrictions.

The cruise industry, with its rigorous protocols, believes it has proven ships can sail safely, with nearly 400,000 passengers carried in more than 10 major markets. This week, CEO Richard Fain said Royal Caribbean Group had just 10 positive COVID-19 tests out of more than 100,000 cruisers and those were handled without major disruption.

'It’s anchors aweigh for almost every travel industry in the US yet the Biden administration is keeping our cruise liners docked while many other major countries begin to operate cruises safely under health guidelines,' Florida Attorney General Ashley Moody said. 'The rationale for keeping US cruises shuttered through the foreseeable future is based on outdated data and guidelines put in place before we had a COVID-19 vaccine.'

Moody charged the federal government with 'acting outside its authority in singling out and docking the cruise industry while other tourism-based businesses continue to operate in accordance with health guidelines. This heavy-handed federal overreach,' as she called it, 'is harming our nation’s economy and is especially damaging to Florida’s economy and our vital tourism industry.'

In addition, DeSantis said the federal government has failed to provide relief funding to seaports while airports and transit agencies have received assistance through previous relief packages. Earlier this month, he recommended Florida’s seaports receive $258.2m out of the state’s share of the American Rescue Plan Act of 2021 to account for the losses accrued due to the conditional sail order.

That promise of relief has been warmly welcomed by ports.

'Port Canaveral is one of many seaports in Florida and around the country trying to manage the significant economic impact since cruise passenger travel has been shut down since last March,' Port CEO Capt. John Murray said earlier. 'We are facing significant and increasing financial challenges to sustain our port operations, support our ongoing business lines and maintain a level of readiness for when and how the cruise industry may begin sailing again from Port Canaveral.”

Without cruise operations since March 2020, Canaveral’s 79% loss of operating revenues has led to a 43% reduction in its workforce, $10m year-over-year reduction in operating expenses and deferment of more than $119m in capital projects for two to five years.

The Port of Palm Beach, meanwhile, has lost $2m in cruise business revenue, according to Executive Director Manuel Almira, who said DeSantis’ recommendations could help the port's recovery efforts.