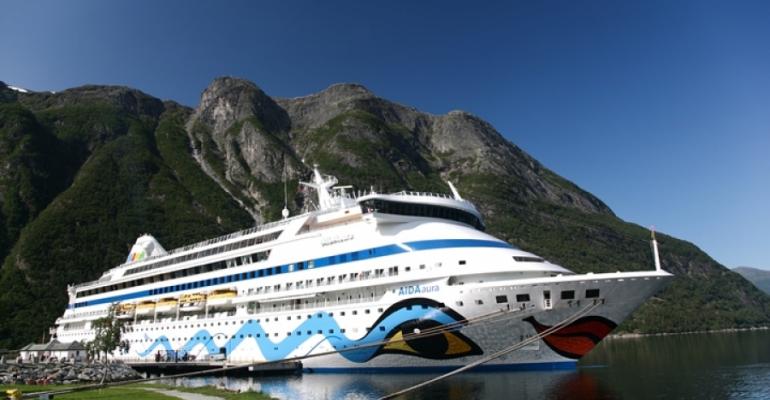 AIDA Cruises has re-shuffled its summer deployment for AIDAaura and AIDAstella with the latter 2,192 lower berth vessel switching from East Med to West Med due to security concerns in Turkey and adding AIDAaura on ex-German itineraries instead of weekly cruises from Palma de Mallorca as orginally scheduled.

1,266 passenger AIDAaura will be deployed on a variety of North Europe cruises mainly departing from Kiel. Cruise durations vary between two and 21 days.  A  21-day itinerary to Greenland, departing from Kiel on June 30 includes maiden calls at Sisimiut and Nuuk, as well as a passage of Prins Christian Sund.

AIDA revealed yesterday AIDAaura will embark on her unexpected North Europe season with a transfer cruise from Palma to Hamburg starting on April 30.

The ship will arrive in Germany on May 7, coinciding with Hamburg's anniversary festivities and starts operating to Norway, Svalbard, Iceland and Shetland as

well as to the Baltic until the end of the North Europe season late in September.

AIDA says it will also offer mini-cruises on AIDAaura as appetizers to gain new guests. Two-day cruises from Kiel to Copenhagen and four-day itineraries to

Copenhagen, Oslo and Gothenburg will be available from Kiel in May, June and September.

AIDAaura's unexpected arrival is boosting volumes at the Port of Kiel, which had initially expected the number of cruise ship calls to drop this year. Now, Kiel

is facing another record season, with the number of port calls scheduled up to 139.  Kiel Port's spokesman, Ulk Jahnke, praised the excellent cooperation

between AIDA and the port in realising the repositioning of AIDAaura to Kiel.

AIDA's move to drop capacity in the Eastern Med in favour of capacity expansion in the Western Med and North Europe goes along with a major shift of the security-sensitive German source market.

Turkey is experiencing a sharp drop of holiday bookings from the German market – last week, TUI announced landbased bookings were 40% below last year's volume. In contrast, Spain and Portugal are currently experiencing a 40% increase in bookings, with especially Madeira, Gran Canaria and Mallorca Island gaining additional holidaymakers from Germany.