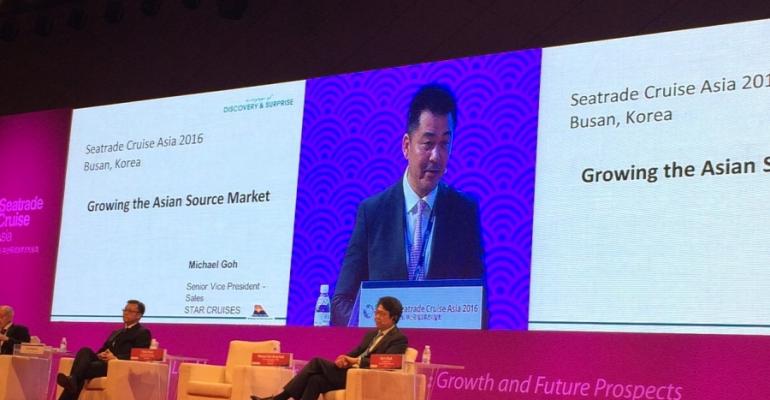 Chartering as a mainstream mode of distribution could be unhealthy for the growing Asian cruise industry.

This was the sobering message from Michael Goh, svp, sales, Star Cruises during day 2 of the Seatrade Cruise Asia 2016 conference in Busan, Korea. In the west only 2-3% of sales are from charter cruises, while in China  more that 90% of cruise sales in 2015 were from charters, he said.

It is believed wholesaler travel agents usually distribute 50% of their chartered cruise to other retail agents.

He pointed out 9 out of 10 cruise ships homeported in Shanghai in 2015 sold cabins through chartering. This meant 98% of all 320 cruises departing from Shanghai were chartered cruises.

Goh said there are serious implications. According to his sources, travel agents recorded a loss of RMB 20 -30m from their chartering business last year.

It is thought-provoking when this is highlighted by Star Cruises, the pioneering cruise line when it comes to developing cruise in Asia.

The Genting-owned organization is the one that jump-started the cruise industry in both Southeast and North Asia by building port infrastructure and putting cruising on the radar for the regions' governments and consumers alike. Star was the first to homeport ships in ports such as Singapore and Keelung, Taiwan.

‘We built infrastructure in Asia and many are operating the same itineraries that Star developed 20 years ago,’ Goh commented.

Goh said crux of the matter is that the race and competition with regard to unsold cabins has hurt the image of the cruise market and yields.

Cruise lines usually require travel agents to sell 90% of the chartered cabins or travel agents will be fined. This results in a vicious scramble to make last minute sales. He reported that last year Star was due to homeport a vessel in Shanghai and while preparing to do so, were offered some 16 charters from distribution companies.

Star decided rather than distribute its product through an agent charter, it would locate the vessel elsewhere and it did - taking a strong stance that charter businesses are not helping to grow the cruise industry in Asia.

Star Cruises is planning an upcoming chartered cruise from Australia to India but it will be mainly incentives.