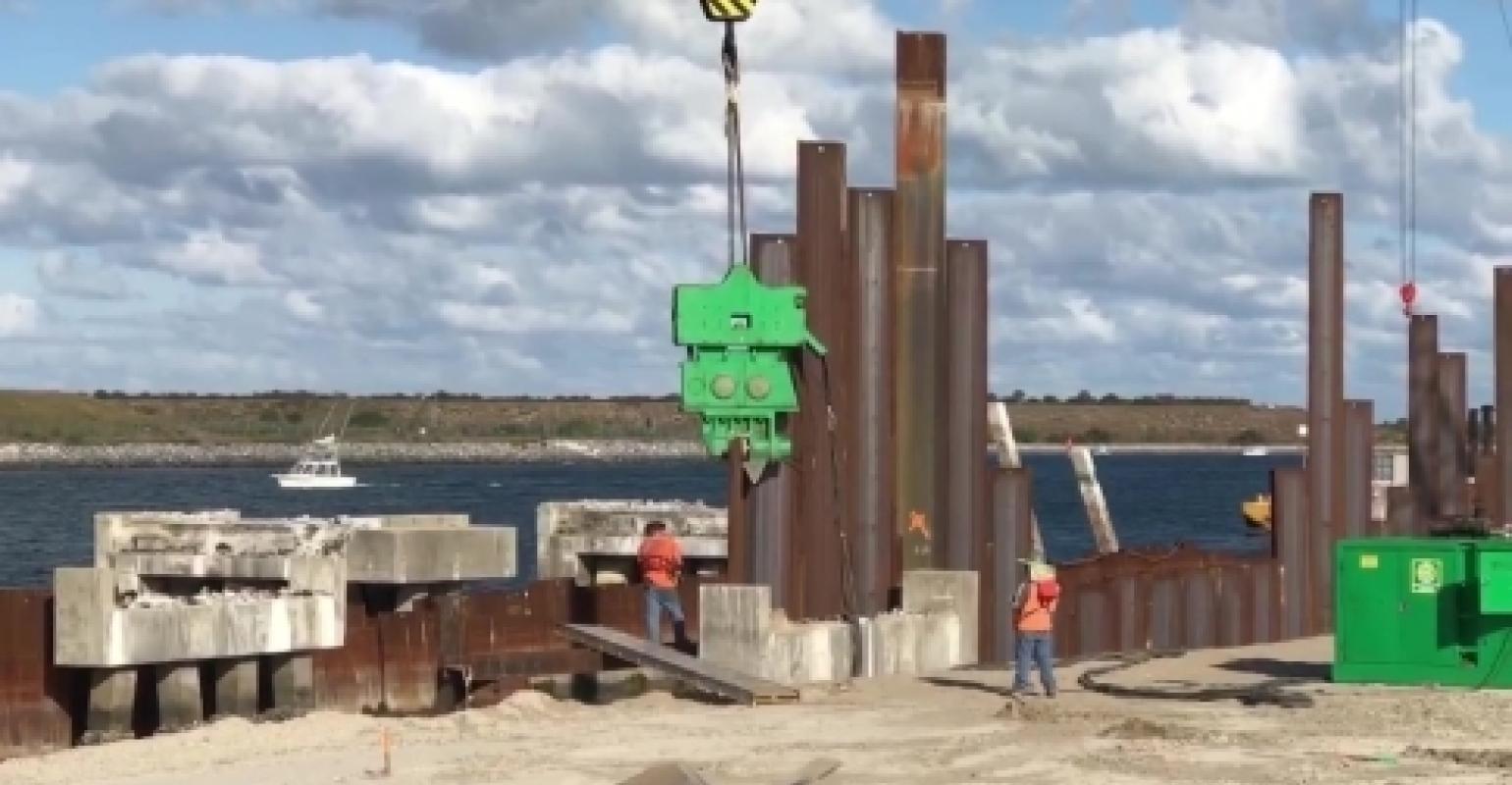 RUSH Marine construction crew uses a vibratory hammer to drive temporary steel pilings at the site of the new berth for Cruise Terminal 3
At a special meeting on Tuesday, the Canaveral Port Authority Board of Commissioners unanimously approved awarding Merritt Island-based Ivey’s Construction Inc. a $78.98m contract for the Cruise Terminal 3 project and a $29.53m contract for the adjacent 1,800-vehicle parking garage.

Ivey’s was the low bidder to build a two-story, 188,000-square-foot terminal as part of the port’s largest single construction project in its 65-year history—a $163m complex that will become the homeport for Carnival Cruise Line’s largest cruise ship, Mardi Gras. Completion is scheduled for May 2020.

'We're creating a world-class cruise terminal, and with these contract awards, the project is mobilizing and moving ahead,' port CEO Capt. John Murray said. He expressed confidence that the facility will be constructed on schedule and on budget.

A five-member Port Canaveral selection committee favored Ivey's for the cruise terminal project over a partnership of HJ High Construction of Orlando and Suffolk Construction of West Palm Beach, which bid $83m. Committee members gave Ivey's top scores based on factors such as pricing and construction schedule. Ivey's received an average score of 93.8 out of 100. The Suffolk/HJ High partnership earned an average score of 86.2. Ivey's also submitted the lone bid on the parking garage project.

Because both bids exceed original project estimates, the port is using 'value engineering' to analyze design features for cost-saving options.

'The goal of the value engineering process is to partner with the design and contracting teams to provide the most cost-efficient structure while maintaining the original design intent and function of the facility,' said Bill Crowe, VP engineering, construction and facilities for Port Canaveral.

RUSH Marine of Titusville is the contractor currently working on the waterside construction of the new berth, which began in September. Construction crews are demolishing the existing pier structures at the site and installing protective barriers to prevent erosion resulting from wake and wave action generated by vessels transiting the port’s main channel. The $38.6m project is expected to be completed in December.

Last month port commissioners approved issuing up to $117m in bonds to finance the cruise terminal project. Miami-based Carnival also will provide $50m as part of a long-term agreement between the port authority and the cruise line that began in September. Additionally, the port will receive $6m in grants from the Florida Department of Transportation for project infrastructure work.

Ivey’s Construction built Cruise Terminal 1, the port’s newest operational terminal, and its adjacent parking garage in 2014. Ivey’s also constructed the parking garage for Cruise Terminal 5 on the port’s north side in 2016. The company currently is working on north side cruise terminal roadways to improve traffic patterns, augment pedestrian safety and expand and improve the capacity of existing roads. Ivey’s also is the contractor for the port’s wayfinding project and is currently installing new vehicular directional signs and gateway signs throughout Port Canaveral, on SR 528 and A1A. Those two projects will be completed this spring.

With a futuristic design inspired by nearby Kennedy Space Center, CT-3 will welcome the 180,000gt XL-class Mardi Gras, under construction at Meyer Turku. The ship has capacity for 6,500 passengers and about 2,000 crew members, It will be the first North American-based cruise ship powered by liquefied natural gas when entering service in fall 2020. Another first at sea is a roller coaster.