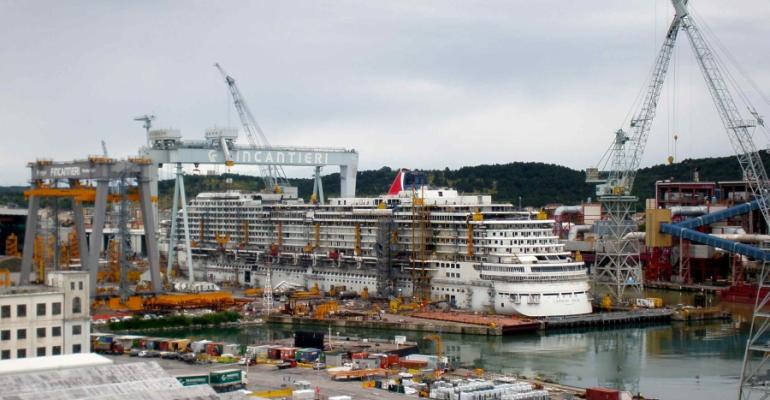 Fincantieri's Monfalcone and Marghera yards will produce five of the ships

Carnival Corp. & plc's whopping nine-ship order—split between Fincantieri and Meyer Werft—is the largest ever placed by the company and features next-generation newbuild designs for established markets in North America and Europe and newer markets including China.

The memoranda of understanding with the Italian and German builders cover deliveries over a four-year period, 2019 to 2022, and include options for additional ships. The agreements are subject to financing.

Carnival announced the order on the eve of reporting its first quarter financial results.

'We're excited to take this next step in our fleet enhancement plan with these two new agreements that are consistent with our long-term strategy of measured capacity growth over time,' said Arnold Donald, president and ceo of Carnival Corp. He added these will be the most efficient ships Carnival has ever built and promised experiences that will create 'even more excitement around cruising.'

The order averages out to 2.25 ships per year, within the two to three annual additions goal Carnival has stuck to for several years, UBS Investment Research said in a note.

Fincantieri will develop and build five ships at its yards in Monfalcone and Marghera. CEO Giuseppe Bono said the business gives the builder a long-term strategic prospective, and 'reinforces the extraordinary partnership between us and Carnival Corporation, developed over time thanks to the confidence the group has always shown in us, which we assure will be once again well placed.'

For his part, Bernard Meyer, managing partner of Meyer Werft, expressed delight that Carnival 'trusts our strength to bring this ambitious newbuilding program to life in Turku and Papenburg.'

Carnival said additional ship orders will be explored over the coming decade as part of its long-term partnerships with Fincantieri and Meyer.

Additional information on design and which of the company's nine brands will add tonnage will be announced at a later date.

With Norwegian Cruise Line Holdings and Royal Caribbean Cruises Ltd.'s ordering intentions known through 2019, capacity growth for the North American industry is expected to average around 3.5% over the next three years, below the trailing 10-year average of 4%, UBS analyst Robin Farley said.

She added that forward growth rate is likely to decline further as ships are moved to other markets.