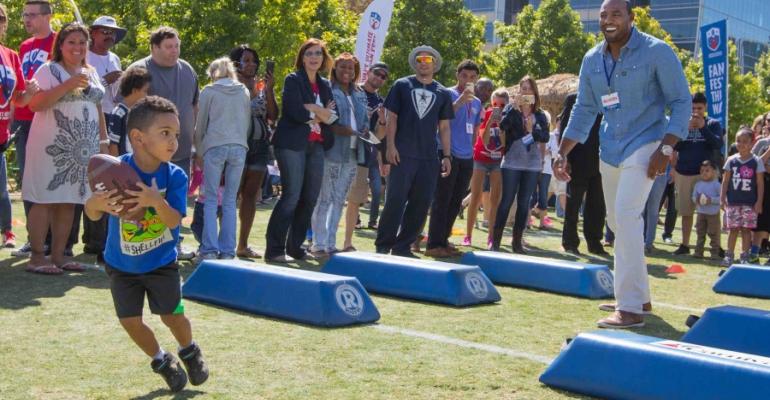 A football toss was among the activities at an event emceed by Darren Woodson, three-time Super Bowl champion with the Cowboys (Photo: Carnival Cruise Line)
The Official Cruise Line of the Dallas Cowboys provided a day of fun at the Ultimate Cowboys Fan Fest over the weekend at a park in Dallas. More than 6,000 people were treated to activities sponsored by Carnival Cruise Line, capped by a free concert by country star Trace Adkins.

Among the activities were mini-golf, a bean bag toss, ping pong, an inflatable slide shaped like a Fun Ship funnel, face-painting and a re-creation of the Football Academy training camp. Carnival also provided a taste of offerings from its Caribbean-themed RedFrog Pub and the Mexican-themed BlueIguana Cantina.

Throughout the day, contestants were chosen at random for the chance to compete in a football toss against Woodson. Every hour, one attendee won a Carnival cruise.