Carnival to roll out its first nine-brand marketing initiative 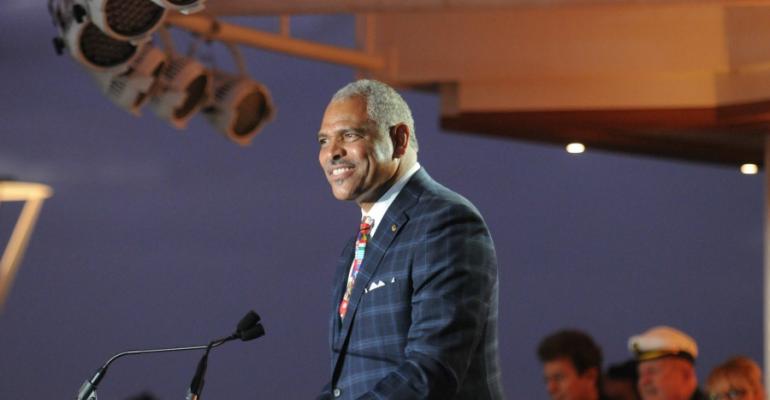 Over the next several months, the campaign will ramp up with robust digital and television components.

The effort will seek to overcome myths about cruising and is intended to go beyond wave season and have a 'longer-term view,' as Donald put it.

'Everyone's an expert in advertising,' he said during a media call to announce the campaign. 'The trick for us is to take that energy and translate it into improved communications.'

The initiative will take place under the umbrella of a revamped World's Leading Cruise Lines website, and consumers will be encouraged to participate with enticements such as the chance to win one cruise a year for life. (Currently the site features only the six brands that source extensively in North America.)

In the 'World's Leading Cruise Lines Marketing Challenge,' a crowdsourcing program, Donald and celebrity emcee Cedric the Entertainer will ask consumers to 'join the company's marketing team' and pick their favorite television advertisements from a selection of creative concepts, with the chance for one participant to win a yearly cruise.

A 'CRUISE-A-NALITY' element on the website will enable consumers to match themselves to one of 30 different cruise personas in what Donald called a 'fun and easy way to engage and find out which cruise lines may suit your personality.'

Plus, Carnival Corp. will launch its new Twitter handle, @CarnivalPLC, with a contest asking consumers to share what they love about cruising. Participants will tweet the reasons they love cruising to the new handle with a hashtag that will be revealed on the handle. In addition to instant prizes for tweets at 50,000, 150,000, 250,000, 400,000, 500,000 and 750,000, one individual who tweets the Carnival handle and hashtag will be selected at random to receive, for themselves and a guest, 100 days of cruising on their choice of Carnival's US brands.

At some point, but not initially, the program may have a loyalty component, harking back to one of the early features of the years-old World's Leading Cruise Lines joint marketing platform.

When a British trade reporter asked how the marketing will be manifested in the UK, Donald said most of the initially web-based campaign is focused on North America, adding: 'We'll see how that plays out.'