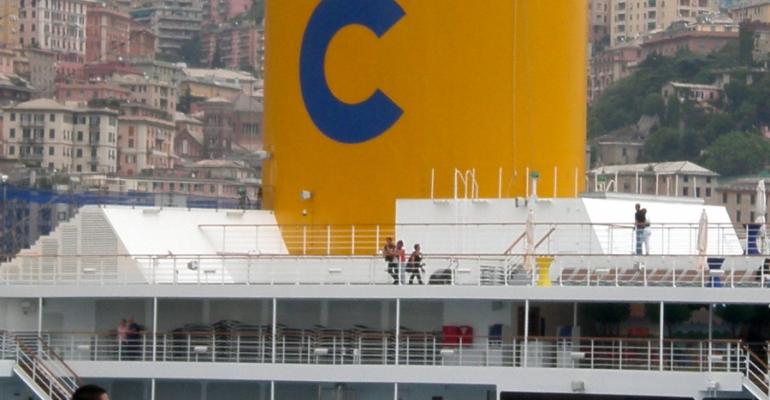 Costa's Norbert Stiekema: Concordia eroded trust, but underlying brand loyalty still there
Carnival corporate vice chairman and coo Howard Frank has given another ringing endorsement of Costa Crociere, describing it as ‘an iconic brand not just in Italy but throughout the world.’ Speaking in Venice on Saturday at the delivery ceremony for Costa’s latest flagship, Costa Fascinosa, Frank’s statement was intended to quell speculation over the future of the Costa brand, which chief executive Pier Luigi Foschi suggested was in question as recently as March.

It is a message that has been reiterated many times over the last six weeks in a video played by Costa executives in the course of a multi-city Italian roadshow aimed at helping restore faith in the company.

It is also part of a wider rehabilitation strategy that was in ample evidence in Venice, with executives from Costa and shipbuilder Fincantieri stressing repeatedly the importance of the Genoa-based cruise line and its US parent to the hard-pressed Italian economy.

‘From the beginning, Carnival and its board has been unwavering in its support of the company,’ Frank said in Venice, adding that, in the wake of the Concordia disaster ‘there was a hiatus where there was no attempt to sell a cruise. Over the last few weeks, selling has started and bookings have been very strong.

‘A number of questions have been raised about the Costa brand and whether it has a role in the future,’ he said. ‘Based on Pier Luigi Foschi’s comments, we can see that the brand has recovered substantially and is well on the way to a successful future. It has made a remarkable recovery.’

In his analysis of Costa’s progress, Foschi said bookings were running in line with or even above last year, with double-digit growth in the last month compared with the same 2011 period. He also highlighted the company’s strength in key markets, noting that the company was recording approval ratings of 98% from passengers now taking its cruises.

Norbert Stiekema, Costa’s evp sales and marketing, said ‘there was obviously a big hit’ initially in terms of bookings but in focus groups of Costa customers, the overwhelming reaction was ‘anger, the feeling of “how could this happen to you.”

‘It was if they had been let down in a relationship, but there was still clearly a strong relationship. It has been built up over 64 years and it is still there. Trust was hit. All the brand elements were hit. But the underlying loyalty was still there.’

Reconnecting with that sense of loyalty will be critical for Costa going forward. Costa president Gianni Onorato said the company is using pricing and itinerary planning—including mini-cruises tailored to a crisis-hit Italian market with less money in its pocket—to fill its ships and help restore the brand. A happy customer, he said, ‘is the best ambassador of the product and the company.’

Stiekema described it as a strategy aimed at the future rather than just this year, which might explain the widely diverging forecasts from Miami and Genoa on the company’s 2012 financial outlook.

As Stiekema said, even the double-digit increase in bookings over the last month was difficult to interpret. Did it reflect delayed demand from the post-Concordia period or advance demand for low-priced summer cruises? How much did events last year, from an early Easter to disruption caused by the Arab Spring, impact 2011 bookings?

In terms of the cost of the recovery strategy: ‘Whether it will cost us €10m, €20m, €50m or €100m we don’t know yet,’ he said. ‘The third quarter is the most important of the year; the coming six weeks is always when we have the highest level of bookings.’ By then, Costa will have a better idea of where 2012 stands.

However the next six weeks unfold, he expects the company to emerge from the disaster ‘not a stronger company, because that can lead to arrogance, but a more mature company.’ He said the Concordia disaster had forced an analysis of every facet of its operation, exposing areas where success might have bred complacency. ‘It puts a mirror in front of you,’ he said.

‘Things were going pretty well. We had had tremendous growth. We were taking delivery of new ships every year. We were very profitable and highly respected. But maybe there were one or two opportunities we didn’t take. In a period like this you look at everything you do, 24 hours a day,’ from distribution to pricing to advertising.

As a result, Stiekema said, the company is now working to get closer to agents, ‘asking what we can do to help them in terms of training, incentives, information. We are looking to improve our direct distribution channels, whether web or call centre.’

He added: ‘We are looking to get closer to the customer. We were always very customer-focussed on board, but we have now introduced a more customer-oriented brochure and a simplified pricing structure that the customer can understand. And we are making sure that every euro we invest in media, we know what we want from it and what our target is.’