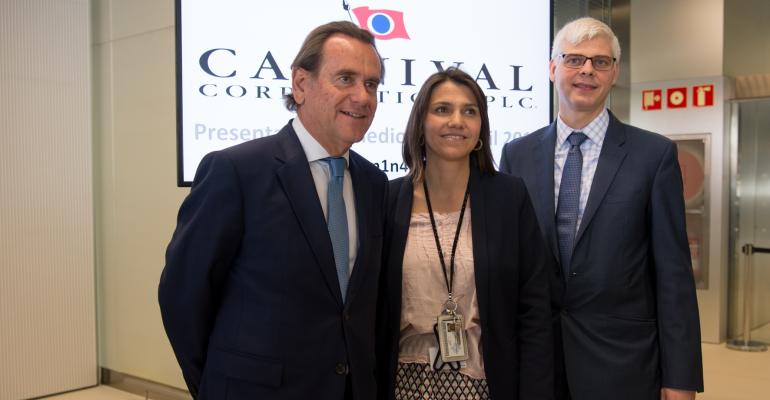 Carnival Corp & plc's new Terminal E on the Adossat Pier in the Port of Barcelona is set for formal dedication on May 5, when senior corporate executives are expected to officiate, headed by ceo Arnold Donald.

At that time, a permanent name for the new building, which links to the company’s Palacruceros at Terminal D, in service since late 2013, is expected to be announced.

Designed by the Barcelona firm Batlle i Roig Arquitectura, the terminal covers 12,500sq mtr on two levels, including seven security channels immediately inside the entrance, a 1,300-seat waiting area adjacent to 60 check-in desks, a 3,500sq mtr baggage claim area and parking spaces for 300 vehicles between the new building and Palacruceros (Terminal D).

Environmental  factors have been fundamental from the outset, with LED lighting wherever possible and the roof constructed with recyclable thermoplastic olefine, strongly resistant to local climatic conditions.

In line with the Barcelona Port Authority's emphasis on minimising emissions, facilities will be available for handling the latest generation LNG-fuelled cruise vessels.

The terminal will be capable of handling the largest vessels on order for Costa Cruises, P&O Cruises and Carnival Cruise Line, each with capacity for 5,200 passengers. More than 250 people will work in the building, including passenger service staff, porters, security personnel and food and beverage personnel.

The Barcelona Port Authority announced earlier this year its strategic plan for eventual location of all cruise facilities onto Adossat Pier, with a limit of seven terminals. MSC Cruises has already begun the planning and permissions process for Terminal F.

Completion of this program will take place around 2026, when the lease concessions expire at Terminals Nord and Sud, adjacent to the World Trade Center.

An additional element of the port's strategy is smoothing out the seasonality of cruise vessel calls insofar as possible. This has produced a 33% increase in cruise traffic during the low season ended March 31.