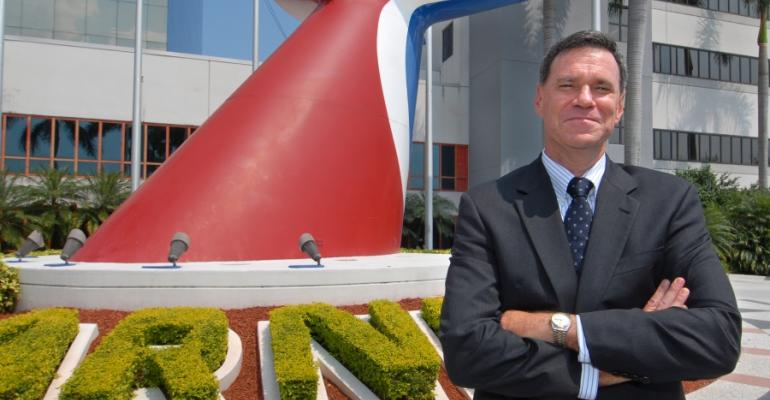 Gerry Cahill, president and ceo of Carnival Cruise Lines, announced his retirement, effective Nov. 30, after 20 years at the Carnival group including as corporate cfo. No replacement has been named.

'Deciding when to retire is not easy, especially when you love what you do. I feel the time is good for me personally and the company and brand are in a good place,' Cahill said.

Cahill, 63, has led Carnival's largest cruise brand since 2007, growing the line to 24 ships while also dealing with major incidents such as the Carnival Triumph and Carnival Splendor fires and power losses and working to recover the brand's reputation with consumers. He oversaw a major, $300m program to retrofit additional safety features and the extensive Fun Ship 2.0 initiative, which is adding new dining and entertainment features fleetwide.

Over time, Cahill also built a new leadership team at the Carnival brand, in areas from sales and marketing to operations and yield management.

He joined Carnival Corp. in 1994 as vp finance, and in January 1998 was promoted to svp finance and cfo.

'Gerry has been instrumental in taking Carnival Cruise Lines to new heights as one of the preeminent brands in the cruise industry,' said Arnold Donald, president and ceo of Carnival Corp. & plc. 'He and his team have delivered new innovations to cruising while growing the business year after year.'

'I can’t thank Gerry enough for his tireless efforts both as cfo of Carnival Corporation and ceo of Carnival Cruise Lines,' added chairman Micky Arison. 'While we would always feel his retiring is premature, we understand and support his decision. His leadership and passion, along with his honest and frank views, will be missed, and we will always have a deep appreciation for Gerry’s tremendous contributions to Carnival Corporation.'

In a letter to employees, Cahill conveyed his thanks and appreciation for their support.

'I cannot begin to adequately express how inspiring it has been for me to work with all of you who have remained so loyal and dedicated to the task even when things were difficult,' he said.

Cahill recounted highlights such as the introduction of four ships and the new Dream class, which included Carnival Dream, one of the largest ships in the fleet, and Carnival Magic and Carnival Breeze, with many new branded spaces and experiences.

Brand initiatives included the Carnival LIVE concert series, Seuss at Sea and other partnerships such as with celebrity chef Guy Fieri for Guy’s Burger Joint and comedian and television personality George Lopez for The Punchliner Comedy Club.

In his letter, Cahill said: 'When I was in my 40s, I thought I might retire at 50. And then when I turned 50, I thought I would retire at 60. And, now, I am 63 and feel the time is right for me personally. I also feel that the brand and the company are in a good place.'