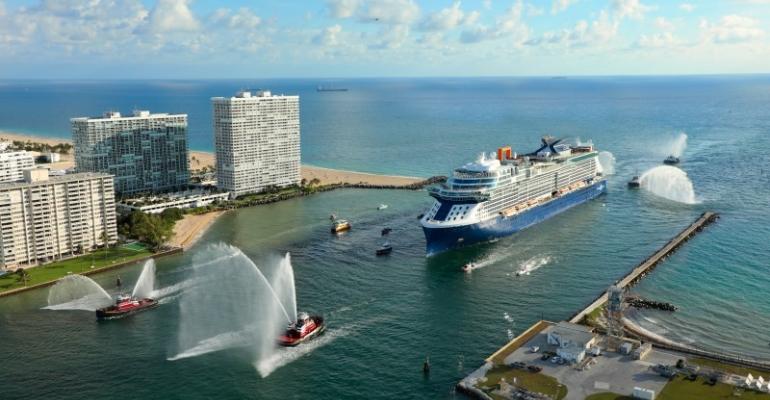 One of the year's most anticipated cruise ships has arrived stateside, with Celebrity Edge sailing in to Port Everglades Monday morning and docking at its new, customized Terminal 25.

'Years of dreaming, designing and dedication'

Richard Fain, chairman and CEO of Royal Caribbean Cruises Ltd., and Lisa Lutoff-Perlo, president and CEO of Celebrity Cruises, were on the bridge for the arrival.

Fain called it the 'culmination of years of dreaming, designing and dedication to bring this magnificent ship to life. A new era is truly upon us.'

And Lutoff-Perlo referred to a 'historic moment for Celebrity Cruises' that has been more than four years in the making.

'The collaboration and effort between teams across the world all comes together in this incredible moment,' she continued. 'I can think of no better place to be than with Captain Costas and the crew of Celebrity Edge, knowing that we are sailing into the future, literally and figuratively, with this beautiful ship.'

Lining the decks as Celebrity Edge entered the channel for the first time were more than 1,400 excited crew members, waving to a sea of shoreside colleagues who gathered to welcome the ship and crew to their new home during an exclusive welcome event hosted at Nova Southeastern University Oceanographic Center—a fitting debut for Celebrity’s first new ship in six years and the first of a new class in more than a decade.

Upon docking at T25, Lutoff-Perlo and Fain hosted a grand opening ceremony for the revolutionary, $120m facility. Celebrity executives and Broward County and city of Hollywood officials were on hand for the ribbon-cutting. A short video clip is here.

The 157,800-square-foot terminal was brought to life in collaboration with Port Everglades, Bermello Ajamil & Partners and Moss Construction. Its 'modern luxury' design echoes that of Celebrity Edge. An expedited process will streamline check-in, with 48 mobile, pod-style stations, and the facility is designed for simultaneous embarkation/disembarkation.

Suite passengers will get a singular experience on their way to The Retreat aboard Celebrity Edge with their own exclusive lounge, elevator lobbies, screening areas and a private rooftop terrace.

Celebrity Edge visited the Azores and Freeport, Bahamas, during its trans-Atlantic crossing, a journey of more than 4,000 miles that departed Chantiers de l’Atlantique in Saint-Nazaire on Nov. 4.