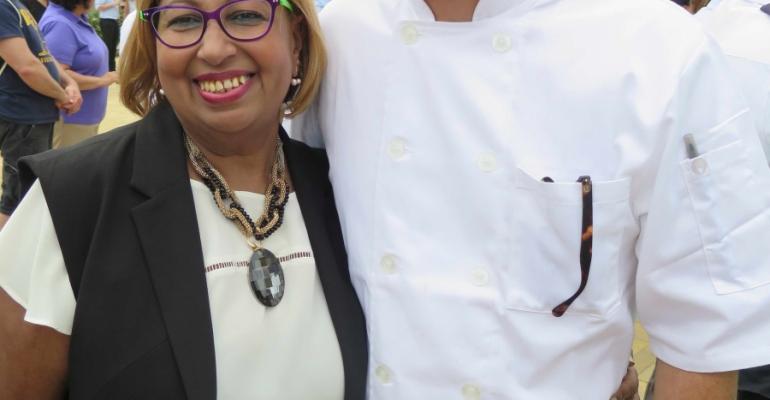 From ropa vieja to red snapper with coconut sauce, Adonia's Ocean Grill serves traditional Cuban and Dominican dishes with a modern aesthetic. Fathom hired the Dominican chef and food stylist Emil Vega to design the menu for its specialty restaurant, and he's fired up about authenticity, fresh ingredients and local sourcing.

'I want the food to be as fresh as possible and not so industrialized,' Vega said. He doesn't take credit for the recipes, which are all traditional, but he came up with ways to boost their appeal for international eyes and palates.

Vega's mofongo—a dish claimed by Dominicans and Cubans as their own—uses roasted pork belly, instead of fried chicharrón, in mashed green plantains and garlic, served with spicy mayonnaise. His asopao, a Dominican stew made with different types of meat and pigeon peas, has slightly sticky and chewy alborio rice. 'At home we have it a lot soupier,' the chef said.

And for Ocean Grill, he toned down the oxtail a bit and presents it with pasta, instead of the traditional rice, to add balance to the menu.

Vega said the sancocho, a stew, is most representative of Dominican culture since it incorporates root vegetables used by the native Taino people, meats brought by the Spaniards to the island and plantains that African slaves used in their cooking.

The chef has been surprised at the popularity of Ocean Grill's bolder menu options, like goat, which was hard to source in Miami, where Adonia provisions.

Vega aspires for the ship to buy more items in the Dominican Republic, a challenge because of factors like food safety. He has met with Puerto Plata suppliers who have NSF International certification, which ensures food safety and quality.

'I'd like to have Dominican avocados instead of Haas,' he said, along with organic ingredients, local peppers and spices, ripe mangos and (gluten-free) cassava bread, a product of Taino heritage.

Creating the Ocean Grill menu and training the chefs, who were used to cooking for British passengers when the ship operated for P&O, was Vega's first cruise project. Previously he operated several popular restaurants in the Dominican Republic. One specialized in healthy dining, another in Asian dishes.

After earning his hotel and restaurant management degree in the United States, Vega worked for Marriott before returning home to develop a succession of restaurant concepts and a gastronomic magazine.

He became interested in cooking as a boy during visits to his grandfather, a gourmand decades before the term was known in the Dominican Republic. 'His kitchen was his lab,' Vega said, and his grandfather wrote a novel about food.

Adonia passengers have been raving about Ocean Grill, where there's a $25 service charge for dinner and $15 for lunch. And they're relishing the Dominican burger and Cuban sandwich, also created by Vega, at the open-air, no-charge Lido Cafe near the pool.