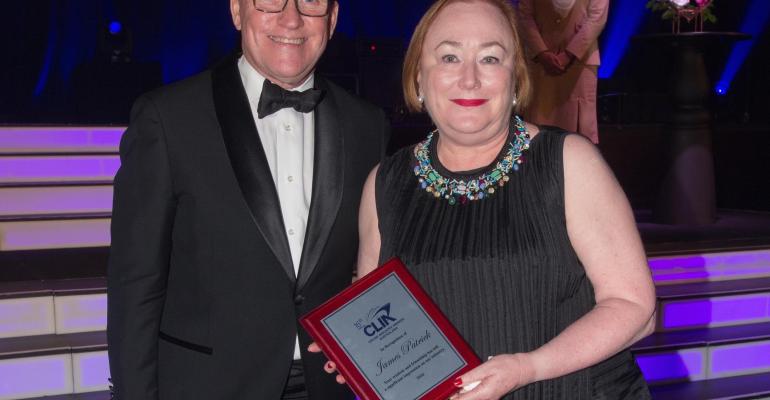 With enormous dignity, Diane Patrick accepted a special award for her late husband James at the CLIA Australasia annual awards dinner in Sydney on Saturday night.

The posthumous award for ‘Contribution to the Australasian Cruise Industry’ was presented by CLIA Australasia chairman Steve Odell.

‘James and Diane have been the owners of Wiltrans International since 2002, proudly and successfully representing a range of top cruise lines including Silversea, Regent Seven Seas Cruises and, until very recently, Crystal Cruises, and it is the current gsa in Australia and New Zealand for Paul Gauguin Cruises,’ Odell said.

‘James was a chartered accountant by trade whose career took him to New Guinea in the late 1960s.

‘He established Ku-ring-gai Travel in the Sydney suburb of Turramurra, one of the very first American Express representative travel agencies. He also worked in the hotel industry with the Park Plaza group before joining Diane at Wiltrans.

‘In 1996 James and Diane made a significant contribution as part of the founding group of the International Cruise Council Australasia, which today is CLIA Australasia.

‘Diane served as the ICCA chairman for three years from 1997 through 1999 and, with James, provided a level of support which was instrumental in those foundation years,' Odell continued.

‘At a personal level, I have been fortunate over many years to share not only plenty of serious conversations around the direction of our association, but also many laughs with James, a true gentleman.

‘James loved a smoke and enjoyed a fine glass of red. He was highly intelligent and appreciated by all of us, particularly for his wicked, dry sense of humour.

‘It is with these warm thoughts that CLIA wishes to recognise James tonight.’