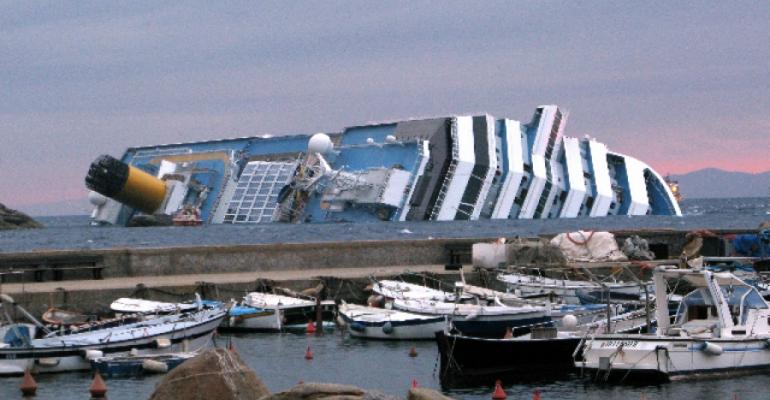 Concordia wreck - divers recover a woman's body
Update: Reuters on Monday reported that two more bodies were found, of women, near the Deck 4 Internet cafe, for a total of 15 confirmed deaths. Divers on Saturday recovered the body of a woman from the capsized Costa Concordia, bringing the number of confirmed deaths to 13, the BBC reports. Rescue workers on Sunday continued to comb the wreck for 20 people still believed missing nine days after the ship grounded off the island of Giglio.

The BBC and other media said only eight of the 13 bodies found so far have been identified. Officials said four victims were French, one was Italian, one German and one Spanish.

The discovery of the woman, who reportedly was wearing a life jacket, came as rescue officials vowed to continue their search through all areas of the ship. Operations have been halted periodically for safety.

Earlier, Costa Crociere chairman and Pier Luigi Foschi told Italian state television that Capt. Francesco Schettino did not give correct information to the company or the crew after Costa Concordia hit rocks off the Tuscan coast.

According to the Associated Press, the company spoke to the captain about 20 minutes after the ship grounded on Jan. 13, but could not offer proper assistance because Schettino’s report ‘did not correspond to the truth,’ as Foschi put it.

The captain allegedly said he had ‘problems’ on board but did not admit Costa Concordia had hit the rocks.

After standing behind Schettino in the hours after the accident, Costa has now turned its back on the captain, who is under investigation for manslaughter, causing a shipwreck and abandoning his ship.

According to AP, Costa in recent days suspended Schettino, stopped paying his legal fees and signed on as a civil party in the prosecution, an action that positions the company as an injured party, enabling it to seek damages if a guilty verdict is reached.

Schettino joined Costa in 2002 as a safety officer and was promoted to captain in 2006. He remains under house arrest.