Costa, 'the Italian cruise company the French fall for' 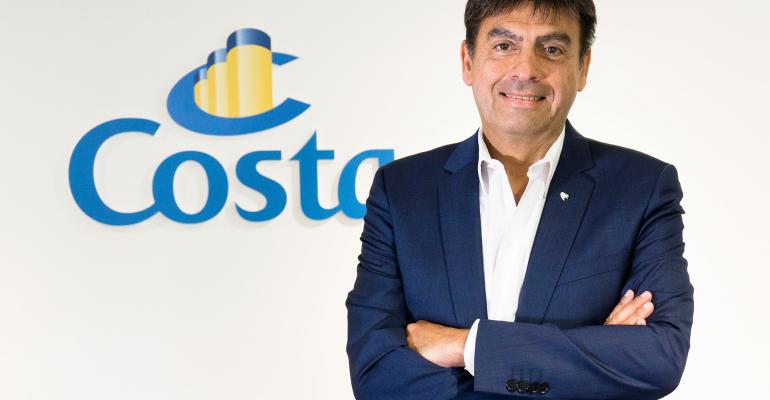 Such was its tagline in 1985, when Costa Cruises made its international debut in France. Since then, the company has remained a leader in a country that is its second European source market after Italy.

'Roughly speaking, one customer in two chooses Costa in France,' said Georges Azouze, who has 34 years with the company in Paris and has served as president of Costa France since 2003.

(The French cruise market comprised 520,800 passengers in 2018, according to Cruise Lines International Association.)

'Our brand awareness ranks 95%,' Azouze said. 'This is the result of quite a few actions but also of a long-term development strategy of the group, which always involved France, a year-round source market.'

Costa was one of the first tourism companies to invest in television advertising in France and it has maintained TV campaigns year after year. 'In 2018/19, it was particularly impressive. Our Costa ambassadors — whether Shakira or Penelope Cruz, both well known here — spoke to our prospective clients because they break barriers and transcend accepted ideas about cruising,' Azouze said. 'They also have many French followers on the social networks.'

To expand its scope and maintain its market position, Costa France also invests in digital marketing and various influencers to attract new communities and show that 'cruising is a world of encounters, sharing and fun,' as Azouze put it.

'In 1996, we were the first to have it as a turnaround port with the Costa Romantica. From then on, it developed its cruise activity. We also made substantial investments there, including in its shipyards which we use for AIDA Cruises.'

Starting in November, the new, LNG-powered Costa Smeralda will have Marseille as a turnaround port and is expected to create a buzz on the French market. Each week the ships will welcome hundreds of French passengers until April 2021.

Marseille hosts also three- and four-day cruises, which have been offered as far back as 1996. Called 'Sea Breaks,' they appeal to a wide range of people and attract a large family audience. They are also very appreciated by the MICE sector.

Since last year, Toulon is also back as a homeport for 'slow cruise' itineraries aboard neoRiviera until the end of October and, in 2020, on board Costa Victoria with 11-day itineraries. Other French ports include Ajaccio, Le Havre, Cherbourg, Saint-Denis de la Réunion, Pointe-à-Pitre and Fort-de-France.

Apart from the Mediterranean, which remains the top choice for French cruisers and where Costa is strengthening its presence, the French are 'very fond of beautiful, far-away destinations,' Azouze said. 'It is a sector where we offer a high added value.'

These cruises are doing very well in 2020, for example, those with Dubai as a turnaround port.

As well, world cruises, launched in 2011, embark more than 500 French passengers each time. 'The 2020 one is a great success and the 2021 should be, as it offers an innovative itinerary around Africa and America,' according to Azouze.

Dynamic partnership with the trade

Costa is sold by 3,500 agencies and has a strong relationship with them through tailor-made proposals from its commercial agents. The 'Costa Next' program (also used in Italy and Spain) uses 'geolocalization' to help agents organize targeted mailings and client events based on their client profiles.

A French affair with Italy

Since 2014's Costa Diadema, the 'dolce vita' spirit has been more prominent aboard Costa ships. It will be even more emphasized on Costa Smeralda, intended to be an ambassador of Italian values and design.

'Costa is back to its Italian DNA. Italy means warm hospitality, gastronomy, good taste, culture, the art of living — all what the French love,' Azouze said. 'It also means fun and entertainment. The ship will address all audiences, with special attention to children. To make it a genuine tribute to the best of Italian style, a partnership has also been made with famous brands, all appreciated [in France].'

Sustainability is also a French concern

'In spite of a current kind of “cruise bashing” here because of the pollution issue, our guests don’t question us about it. But we know this is something the people are sensitive about,' Azouze explained.

'Being a leader and pioneer also means showing the way. For many years, our business model has included actively contributing to the conservation of resources for future generations and sustainable development. It is something the Costa Crociere group is fully committed to, and we assume our responsibilities.'

Since 1997, the company has published an annual sustainability report, certified by PricewaterhouseCoopers and drawn up according to the G4 guidelines for the presentation of substainability reports set by the Global Reporting Initiative.

If the next step against air pollution is LNG, which will power Costa Smeralda, the whole Costa fleet also will be fitted with scrubbers by the end of 2019.

Reducing food waste is another key focus, one Costa has pioneered and communicates to passengers via its 'Taste, Don’t Waste' campaign that invites them to enjoy the food but consume responsibly. Azouze said French passengers react well to this.

Food that has been prepared and not served is collected and given to the needy through the Banque Alimentaire in Marseille, and also is distributed in Pointe-à Pitre-and Fort-de-France. This program should be extended to Saint-Denis de la Réunion next year.