Cruise leaders, new website go to bat for the Caribbean 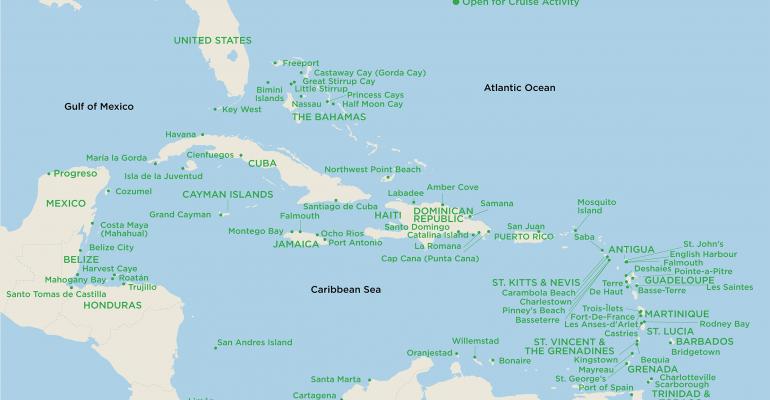 Green dots on the map show the many destinations that are open. Only 15 places are listed as 'under assessment'

A new Florida-Caribbean Cruise Association website details how the Caribbean is open for business, and destinations want travelers to return because it helps hurricane recovery.

Caribbeanisopen.com is part of the FCCA's million-dollar campaign to get the word out that most destinations are fine and welcoming travelers. The site includes a map and a 'Current Port Status' section that lists 95 places. All are 'open' but 15. Those are categorized as 'under assessment.'

A few 'under assessment' are major cruise destinations such as St. Thomas and St. Maarten, while others are smaller, such as Anegada and Jost Van Dyke, British Virgin Islands.

So of nearly 100 ports across the region, almost 85% are open and fully operational. This number is expected to rise to more than 90% in coming weeks, FCCA president Michele Paige said during a media conference call Monday.

Of the 50 ports Royal Caribbean Cruises Ltd. visits, only four were severely impacted—St. Maarten, St. Thomas, St. Croix and San Juan, president and COO Adam Goldstein, who also chairs the FCCA, said on the call, and all of those are expected to be operational by the end of November.

The majority of the Caribbean was 'untouched by storms,' according to Arnold Donald, president and CEO, Carnival Corp. & plc, who said: 'We expect virtually every destination to be up and running in the coming weeks.'

The Caribbean is a vast area encompassing 1m square miles, he added, and there are currently hundreds of cruise itineraries to choose from.

'There is no better way to support the Caribbean than to go to the Caribbean,' Donald said on the call. His company currently has more than 60,000 passengers sailing on almost 20 ships in the region, and people are having good experiences.

Recalling how cruisers going back to Cozumel after Hurricane Wilma in 2005 helped that destination get back on its feet, Paige said: 'There's a direct correlation between ships coming back and the speed of the destination's recovery.'

One ship call, she added, can generate half a million dollars in revenue for a destination. An FCCA study of just 21 destinations found that a single cruise season had a $2.4bn economic impact, creating 55,000 jobs and $842m in wages.

There isn't likely to be any unusual discounting to stimulate demand, the cruise leaders said.

'Overall, we're in a business as usual type of mode,' as Goldstein put it.

When Carnival Corp. reported earnings on Sept. 26, following the worst of the hurricanes, the company stated it was 'largely booked' through the fourth quarter and ahead on price and volume for the first half of 2018, Donald noted. So there is less inventory to fill.

Carnival Fascination, which turns around in San Juan, had more than 31,000 passengers booked when the Federal Emergency Management Agency asked to charter the ship for relief efforts. So Fascination wasn't pulled out of service for lack of demand.

Donald said FEMA is paying Carnival what the ship would have earned in revenue service.

While leaders at a recent Caribbean Tourism Organization meeting noted numbers had been significantly ahead for 2017 and for 2018 before the storms, substantial impact is now expected.

Not so for cruise numbers, according to Paige.

'We don't see any changes. We're keeping the ships in the Caribbean and working diligently to return the ships, because we know [tourism] is the lifeblood,' she said.

Goldstein, who recently toured San Juan and St. Thomas with other top Royal Caribbean officials, applauded the resilience of the region's people.

'It's almost like a badge of honor that they can take a blow like that and come back,' he said.

Asked about the difference between the cruise industry narrative painting a place like Puerto Rico, for one, as able to handle cruise visits, while the national media are reporting about power, fuel and water shortages, Goldstein shared some first-hand insights.

For residents, almost every area of the island was impacted, yet people are managing to work despite the tremendous difficulties. Old San Juan, where ships dock, 'looks completely fine,' Goldstein said. El Morro fortress, which has survived five centuries, 'looks completely fine.' Places like El Yunque rain forest, a popular excusion destination, are going to take longer to come back, though.

There was some impact to the Pan-American terminals 1 and 2, but Adventure of the Seas has been able to operate two turnarounds. There is adequate hotel capacity for the few passengers who add on a stay pre- or post-cruise.

Donald noted there can be a lag between the recovery of residents and the ability of tourism to resume. He pointed out that to some extent, New Orleans (his hometown) is still recovering from Hurricane Katrina 10 years later. Yet tourism has been thriving there.

As for St. Thomas, Charlotte Amalie is 'looking in good shape,' Goldstein said. Merchants and tour operators are 'very bullish.' Roads still need to be cleared in and around the hills of St. Thomas, and Magens Bay as a key beach attraction needs to be accessible.

Today, separate from the call, the Royal Caribbean International brand announced it will return to St. Thomas on Nov. 10. In addition, the line said it's committed to resuming transit calls at San Juan and St. Maarten by the end of November and is working closely with local governments to announce the exact dates.