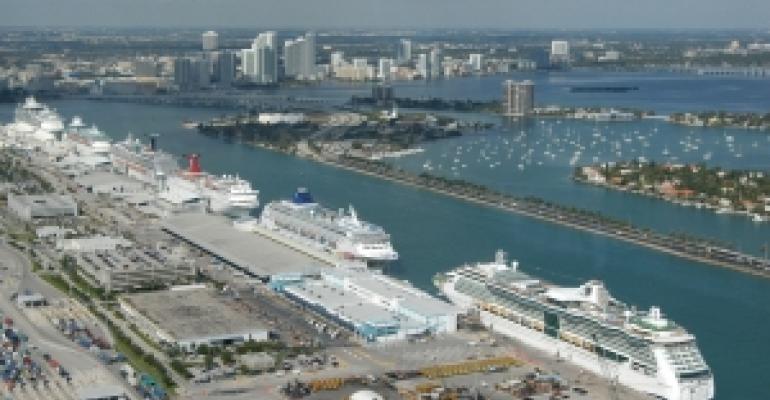 PortMiami led US embarkations in 2013 with 2.01m passengers

Despite a very modest capacity increase in 2013, the North American cruise industry contributed a record $44.1bn to the US economy and created the highest number of stateside jobs ever, a new study found.

The findings are from an independent study commissioned by Cruise Lines International Association.

According to the study, PortMiami led with 2.01m embarkations, a 6.8% increase over 2012, while Port Everglades was second with 1.84m, up 2.7%, and Port Canaveral was third with 1.7m embarkations, down 0.4%. After that, in order, were Galveston, New York, New Orleans, Tampa, Seattle, Long Beach and Los Angeles.

'The Contribution of the North American Cruise Industry to the US Economy in 2013' was prepared for CLIA by Business Research & Economic Advisors (BREA) of Exton, Pa.

BREA found a number of factors influenced the level of growth in 2013 including weak economic conditions in Europe which reduced demand for cruises, especially in the Mediterranean, the continued weak growth in consumer discretionary spending in the US and continued redeployment of capacity from North America to regions like Asia, Australia and the South Pacific.

Plus, capacity growth—which slowed during the Great Recession of 2008-09—continued at a low rate. With the removal of some ships in 2013, the North American cruise industry had a net increase of just one ship, bringing CLIA's ocean-going fleet to 178 ships with 338,505 lower berths, according to BREA. That was a scant 2.8% increase in capacity.

BREA principal Andy Moody attributed the higher 2013 occupancy to a number of factors including a moderate increase in capacity and more cruising by families and groups leading to higher utilization of cabins—which could partly be a response to weak economic conditions with non-family units 'doubling up.' He also surmised lines with traditionally higher occupancy rates increased their share.

Moody noted the declining capacity growth resulting from recession and weak recovery is expected to reverse, and capacity expansion is projected to increase over the next several years.

While aggregate US embarkations fell 1.3% in 2013, this primarily reflected losses on the Pacific coast due to redeployment away from the Mexican Riviera and a shift of some homeporting to Vancouver, BC, Moody said. US embarkations elsewhere, especially Miami, Fort Lauderdale, New York and Boston, are generally increasing.

The BREA chief noted the Caribbean, in terms of deployed capacity, is maintaining its status as the largest destination market and had a nearly 2% capacity increase in 2013, supporting embarkation growth in ports along the Atlantic and Gulf coasts.

Cruise lines continue to raise spending in the US market despite what many would consider a challenging economic environment, Moody added. Most of the goods and services purchased are for North American-based cruises, but ships in Europe and elsewhere are also supplied with US-sourced products.