Cunard's 175th anniversary year gets off to spectacular start 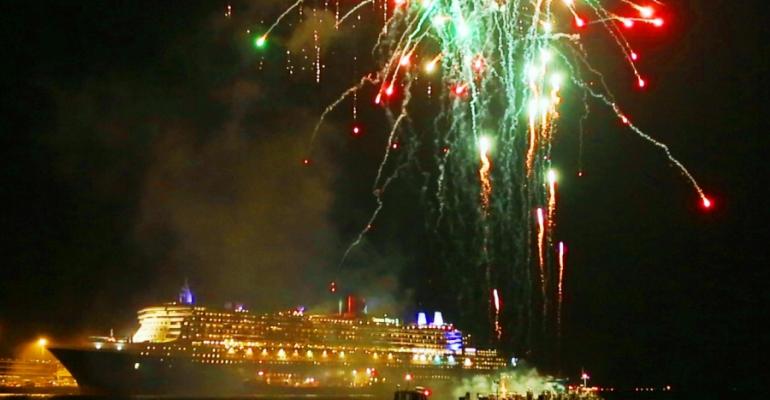 Fireworks light up the sky over Queen Mary 2 in Southampton

Cunard’s 175th anniversary year got off to a spectacular start, with fireworks and marching bands marking the departure of Queen Mary 2 and Queen Elizabeth on their World Voyages this weekend.

A year of celebrations is planned, with special features on board, a top-flight line-up of celebrity speakers and a series of events and commemorative sailings in place for 2015.

Queen Mary 2 and Queen Elizabeth took centre stage in Southampton on Saturday as the two Queens embarked on their 2015 World Voyages.

Joining guests on board were British actress, Celia Imrie (aboard Queen Mary 2), and former chief news correspondent for the BBC, Kate Adie (aboard Queen Elizabeth), as part of Cunard’s ‘Insight’ speaker programme.

The 175 anniversary will be celebrated across all three Cunard ships during the year, with gala dinners, Black, Red and Gold themed balls in the Queens Room aboard each ship, 175 themed commemorative drinks from special blends of wine to craft beers, plus 175 themed cakes and deserts at afternoon tea and formal dinners, specially created 175 merchandise, from collectible Cunard 175 posters to teddy bears and polo shirts to cufflinks and 18 carat Clogue gold jewellery.

Mail posted on board with be over-stamped with the 175th anniversary logo.

Angus Struthers, marketing director for Cunard, said: ‘2015 is going to be an amazing year for Cunard. Highlights will include the gathering of Queen Mary 2, Queen Elizabeth and Queen Victoria in our home port of Southampton on May 3 and up to one million spectators are expected to gather in Liverpool for a three day event 24-26 May culminating with the Cunard fleet, made up of the three largest ships ever to appear in formation on the Mersey, performing a series of carefully choreographed manoeuvres within sight of the Three Graces on Pier Head waterfront, including the iconic Cunard Building which was the company’s headquarters for nearly 50 years.’

He added, ‘We will also be re-creating the transatlantic voyage that marked the start of the company’s 175 years of operation. Queen Mary 2’s Southampton to New York 2-14 July 2015 crossing will sail into Liverpool on July 4 and depart the same day - exactly 175 years since Cunard’s ship Britannia made her maiden crossing from the port, heading for Halifax and Boston.

One of Cunard’s most famous ships, Lusitania, will also be respectfully saluted by Queen Victoria during a special ‘Lusitania remembered’ sailing May 3-10, 2015, as the ship sails into Cobh, exactly 100 yearssince Lusitania was torpedoed off the coast of Ireland on May 7, 1915.