From entertainment to Dynamic Dining 2.0, how Anthem sings its own tune 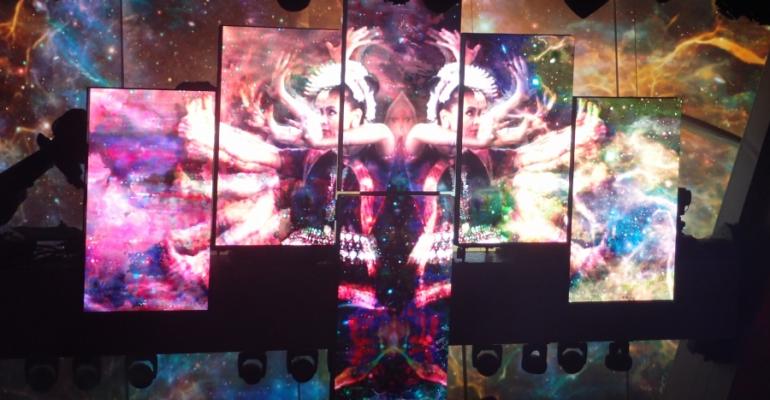 Mesmerizing images on the fast-moving RoboScreens

Arriving just six months after Quantum of the Seas, sister Anthem of the Seas is very similar—identical, in fact, back of house, according to Royal Caribbean International president and ceo Michael Bayley. The significant changes are in what's being dubbed Dynamic Dining 2.0, the entertainment and the art.

Starting with the cruise that embarked April 22, passengers who prefer a more traditional dining style can opt for Dynamic Dining Classic with the same dining times nightly, the same waiters and same table companions throughout the cruise.

Mark Tamis, who recently joined RCI as svp hotel operations, told Seatrade Insider about 38% of cruisers are booking the Classic version. He added that from Day 1, Dynamic Dining has been very popular, but RCI is responding to those who missed aspects of traditional dining like forming a strong bond with the same server.

So it's still dynamic in that passengers rotate through the four main included restaurants. But the Classic choice takes the server along with the diners (Disney Cruise Line-style). Halfway through the cruise, the menus are rotated so dishes don't repeat.

According to Tamis, the Oasis-class ships are still in line to switch to Dynamic Dining, but there's no set time frame. First Royal Caribbean wants to make sure it's delivering a wonderful experience, he said.

'Dynamic Dining is really the future,' Bayley told reporters on an inaugural sailing week. For the new to cruise, this will be natural—not the more rigid, two-seating, same-server style many experienced passengers apparently love.

It's 'tricky at times' to get new things right straight off the bat, Bayley added, as evidenced by his extraordinary email offer last week to past Quantum passengers. He acknowledged there was room to improve Dynamic Dining, and those who make an Anthem booking in May will get $100 per stateroom on-board credit as a goodwill gesture.

In another change, the popular Jamie's Italian—which debuted on Quantum with a $30 cover charge—is testing a la carte pricing on Anthem.

Starters range from $5 for giant green olives to $8 for crab and avocado bruschetta. Jamie's Italian burger is $15 for prime chuck and flank steak with smoked mozzarella, mortadella, balsamic onions, tomato, pickles, chillies and 'funky chips.' Pastas and risottos come in two sizes. For example, wild mushroom and smoked mozzarella risotto is $9 for a starter portion and $17.50 as a main. Baked salmon is $20.

It may work in the UK, where Jamie Oliver is a famous name, but some reporters questioned if there'll be sticker-shock when the ship comes stateside.

Anthem of the Seas has new, exclusive shows, from big productions to a pop-up piano player.

'We Will Rock You,' a West End smash that features the music of Queen, was getting rave reviews during the inaugural cruises from Southampton. It sports a huge cast, and spectacular staging and effects. One New York reporter deemed it better than Broadway. Bayley's own verdict of the show: 'Stunning.'

Royal Caribbean officials said vp entertainment Nick Weir's goal is not to top other cruise lines, but to put on the best shows anywhere.

In the Two70º lounge, an exclusive for Anthem is 'Spectra's Cabinet,' a weird and wonderful parade of characters, dancers, singers and aerial acrobats, with kaleidoscope lighting and special effects. Incorporated are imaginative but startlingly realistic scenes on the super-high-definition Vistarama screens surrounding the lounge and mesmerizing images on the fast-moving RoboScreens.

Weir said further new shows will be rolling out on Anthem in the coming weeks. For example, the Vistarama will re-create a 75-piece symphony orchestra.

'Our guests will enjoy a full philharmonic concert—a first, not only in the cruise industry, but the world,' Weir said of this virtual performance.

And there's quirky stuff, too, like the stow-away piano player. He gives pop-up performances around the ship in the most unexpected places—sometimes, as during an inaugural sailing this week, even in a glass elevator.

Puzzle Break, a phenomenon around the world, puts 12 players in a room to find hidden clues and solve a series of challenges to escape.

Another big change on Anthem is the art.

'It's entirely different,' Bayley said. The style is the same—contemporary, with a number of interactive 'smart art' installations. Now, in the Royal Esplanade, passengers can put their palms on a plate to make lights overhead pulse in the same rhythm as their heartbeat. And on a top deck near the rock-climbing wall, instead of Fiona the bear, there's Gigi the giraffe.

The Wi-Fi was working beautifully on Anthem, unlike the very slow speeds encountered when Quantum debuted in Southampton in November. Bayley said Royal Caribbean's technology partner, O3b Networks, had extended its satellite network coverage so fiber-like speeds are available for Anthem during its UK season, and will also be offered on Allure of the Seas when it begins its Mediterranean cruises in late May.

On Anthem, things were working well enough that reporters and investors could tune in to the webcast of Royal Caribbean's first quarter earnings call on Monday, which management conducted on board. And media were easily able to upload stories, images and video files of the ship's naming ceremony, which followed.

'In terms of our competitors, we are so far ahead,' Bayley said of the Wi-Fi service. This is vital for the new to cruise, younger demographics and people who want to engage with social media, he added.

Like Dynamic Dining, engaging through technology is the future, Bayley added. So expect Royal Caribbean to continue features like the iPads in the guest services area, the Royal iQ kiosks and mobile app for booking and planning activities, and more.