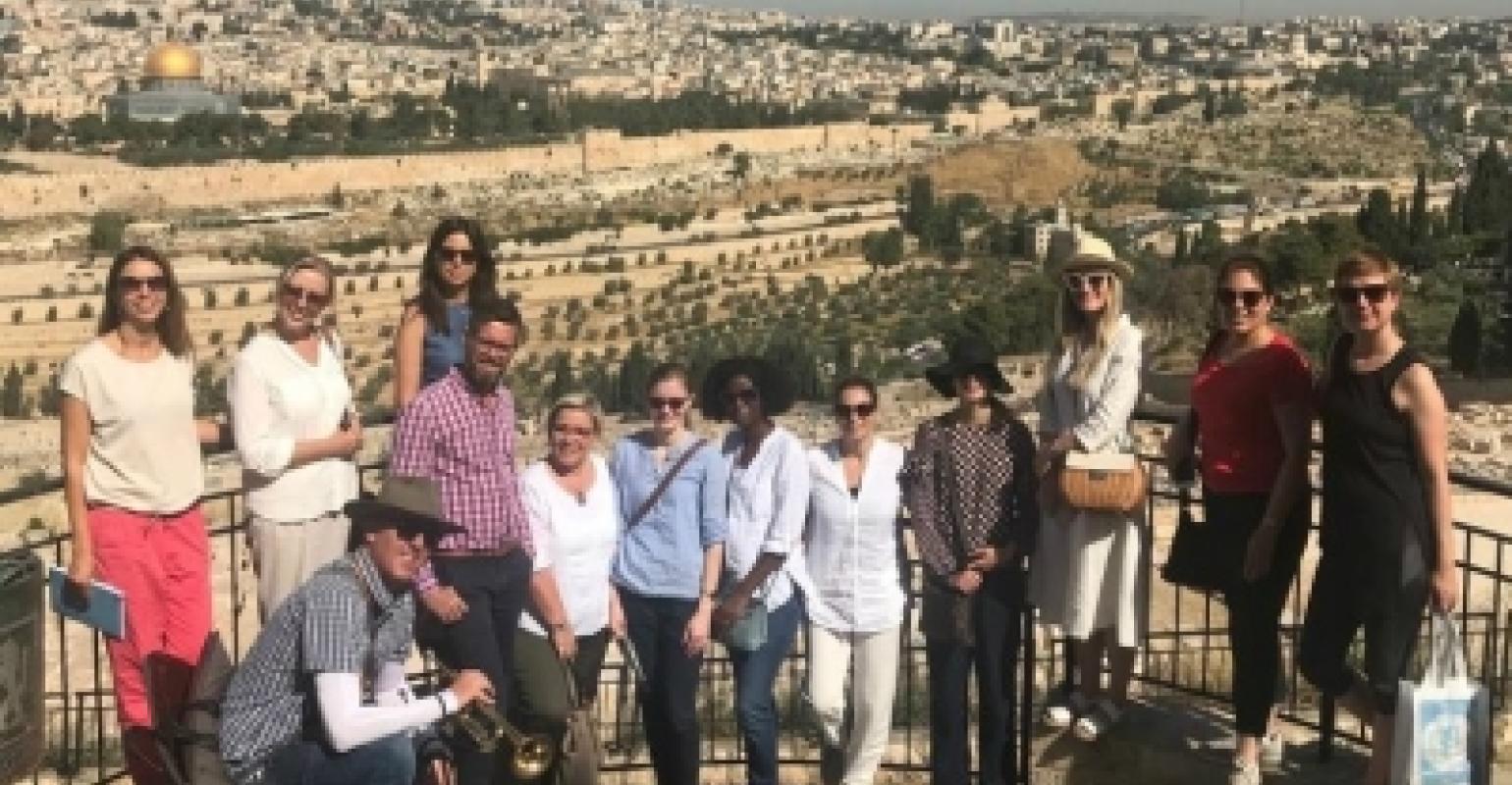 Cruise line executives in Tel Aviv, first stop on this year's Israel-Cyprus Cruise Summit PHOTO: Michelle Winny
Cruise executives from the UK, US, Spain and Germany explored Israel — with visits to cosmopolitan Tel Aviv, Haifa Port and sacred sites in and around Nazareth, Bethlehem and Jerusalem — in the first part of this week's Israel-Cyprus Cruise Summit familiarisation trip.

Sunday's program included Haifa town and the Sea of Galilee and Nazareth with a stop at The Church of the Annunciation, then Tiberias for a visit to the fishing village of Capernaum and Tabgha, believed to be where Jesus multiplied the loaves and the fishes to feed the multitude. After a taste of local cuisine served by Magdelena restaurant, the group travelled to Jordan River baptism site Yardenit and Mount of Beatitudes.

In the evening, as guests of Haifa Port, familiarisation trip participants joined Oceania Cruises passengers on Insignia's 180-day world tour for a special event in Acre, where the old city is a UNESCO World Heritage Site.

On Monday the cruise group learned about the significant regeneration currently under way at the port. Started about a year and a half ago, the renovations are being carried out in stages, according to Haifa Port's Zohar Rom, head of cruise marketing & public relations.

The port currently handles mainly turnaround calls and is in the final stages of completing improvements to the passenger terminal and cruise pier. The Ministry of Tourism provided financing for the passenger terminal, pier and cargo warehouses. This is the beginning of a longer-term plan to regenerate the waterfront which, in a Phase 2 on the east side, is anticipated to include the development of commercial and residential real estate.

‘The new terminal is operational but will be completed in a couple of years. We can accommodate up to three ships simultaneously side-by-side along our pier, handling up to 2,000 passengers and their luggage in half the time in our new passenger hall, where immigration and security are also handled,' Rom said.

Two weeks ago ships from regular caller Mano Maritime, Regent Seven Seas Cruises and Seabourn visited the same day, and the port had no problem accommodating them all, Rom said. Queen Mary 2 is the only ship that can't dock at the cruise pier due to its draft but it can berth at the cargo pier.

The port area's future is still being mapped out but it will undergo significant change. ‘The long-term development plans are still undecided and we are looking into privatisation of the port and how to develop the terminal, but we expect the cargo port to be gone in about five years, replaced by ongoing development of the cruise terminal and waterfront. We will also have a management centre opening in 2020,’ Rom explained.

This year Haifa Port received Costa Venezia for an overnight call on its maiden voyage to Japan. A further 56 turnaround calls are expected, bringing some 27,776 passengers, slightly down from last year’s 63 turnarounds. In 2020, 63 calls are booked.

Surrounding infrastructure is being developed and the local train station has high-speed electric train links running directly to Tel Aviv, located about two minutes away from Haifa Port, with service straight to the airport. Plans for redevelopment of the airport or a complete rebuild are being considered. This rail link also facilitates shore excursions.

‘We are hoping to create facilities to encourage cruise ships to stop for longer,' Rom added. 'We want to make Haifa the centre for the cruise industry.'

Saga Cruises’ Saga Sapphire called this month on its final cruise, a 33-night voyage, before going out of service. This included an overland tour visiting the Holy Land sites and an overnight in Jerusalem, according to Michelle McDermott, Saga Cruises’ senior purchasing & operations shore excursions executive.

The group also visited Bethlehem before heading back to Jerusalem, stopping at Yvel Design Centre for a wine and cheese tasting. The centre specialises in handcrafted, high-end pearls and jewellery.

Yair Herdan, the group's tour guide in Israel, said excursion planners need to get their timing right when creating itineraries. 'You have to negotiate overtourism as the sites get busy and during peak times some groups may not be permitted entry,' so it’s a case of planning to offer alternatives according to visitor traffic.

'But for the best experience,' Herdan said, 'it is best to work with local guides that know the sites and how to manage the experience and expectations to ensure visitors receive the best out of the excursion.'