Harmony an Oasis-Quantum hybrid with some new splashes 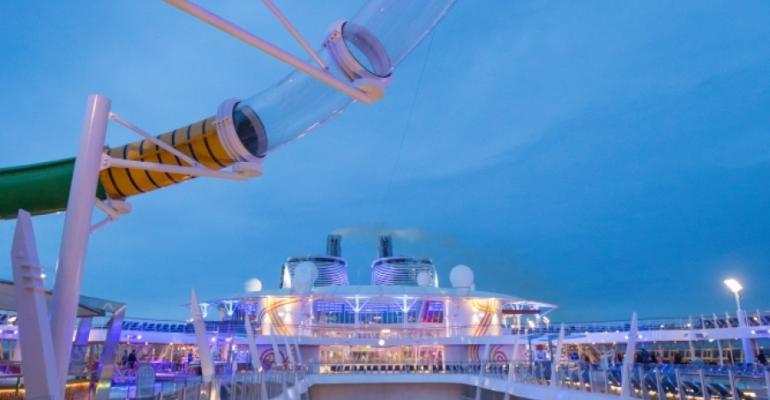 One of the waterslides distinct to Harmony of the Seas loops high above the Central Park neighborhood (Photo: Royal Caribbean)

Harmony of the Seas renews the Oasis-class platform, conceived more than a dozen years ago, with the addition of several Quantum-class venues, 'smart' ship technology and some one-of-a-kind dazzlers.

The dazzlers are the scream-inducing Ultimate Abyss, tallest slide at sea, and a trio of waterslides, Cyclone, Monsoon and Typhoon—The Perfect Storm—that spiral high above the Central Park neighborhood.

On a four-night revenue cruise round-trip Southampton, those brave enough to try The Ultimate Abyss raved about it. Riders sit on padded mats and plunge down 10 decks inside two purple tubes with sound and light effects.

The waterslides, though, weren't open. It wasn't clear if that was weather-related, or one of the things that hadn't been completed on the ship.

Workers were everywhere. The AquaTheater wasn't open, nor some of the children's facilities. Sometimes the Bionic Bar (with its robot bartenders) and the Starbucks (in a new location, on the Boardwalk) weren't either. A few staterooms didn't have water, or hot water, periodically.

BBC News and The Daily Mail reported the world's biggest cruise ship is a 'construction site and a serious risk to all passengers,' both citing the same disgruntled woman.

For the most part, passengers appeared to be enjoying themselves, though Harmony's state of readiness was a common topic of conversation. That four-night voyage ended Thursday, and the maiden cruise departed Sunday from Southampton for Barcelona, Harmony's summer home.

'Things have come very far since our pre-inaugural cruises and on the current maiden voyage to Barcelona all pools and slides are in full operation,' a Royal Caribbean spokeswoman said. She added that the number of workers has been reduced with every cruise and the operatiions team informed that most issues encountered previously have been resolved.

Besides the Bionic Bar, borrowed from Quantum are the specialty restaurants Jamie's Italian and Wonderland (in a new, double-deck version). Further Quantum elements are the smartphone app Royal iQ that's used to reserve dining, entertainment and excursions, check accounts and keep track of activities. Royal iQ is also available on tablets at guest services, where crew stand by to assist.

Harmony offers Royal Caribbean's super-fast VOOM Wi-Fi. Various packages for surfing, or surfing and streaming, are provided for one or multiple devices. An unlimited surfing package for one device worked out to $12.99 per day on the four-night cruise. VOOM was fast and reliable.

Another Quantum advance for this hybrid Oasis ship was the speedy tablet check-in at the terminal, for those who pre-registered their passport information and uploaded a photo. On the pre-inaugural sailings from Southampton, Royal Caribbean was keeping to its goal of 10 minutes from curb to gangway.

Depending on the venue, prices are a la carte (in Sabor, for example, quesadillas and guacamole are $5 each) or there's a service charge ($39 in Chops Grille, for instance, and $45 for a three-course dinner or $89 for a four-course pairing with wine in the gourmet 150 restaurant).

Twenty spots in all serve food, including Coastal Kitchen, a private restaurant for suite passengers.

Harmony of the Seas retains the three-deck main dining room that's so impressive on the Oasis-class ships. Here, though, each level has a different name and decor, emulating the three main Quantum-class dining rooms: American Icon, The Grande and Silk. On Harmony, however, the menu is the same across the three. One level is for traditional two-seating dining and two levels are for 'My Time Dining' (reservations recommended).

Reservations are needed for the headline entertainment. In the three-deck high Royal Theater, performances of the Broadway production of 'Grease' have been packed. A talented cast, catchy tunes and terrific sets make this a crowd-pleaser. 'Columbus: The Musical' is due to open in July. Featured comedians in The Attic and ice shows in Studio B need reservations.

A couple other novel attractions on Harmony are Splashaway Bay (replacing H2O Zone), a large water park for younger children. It has slides, waterfalls and a drenching bucket. And 'Puzzle Break: Escape the Rubicon,' for the first time on Royal Caribbean has its own dedicated room.