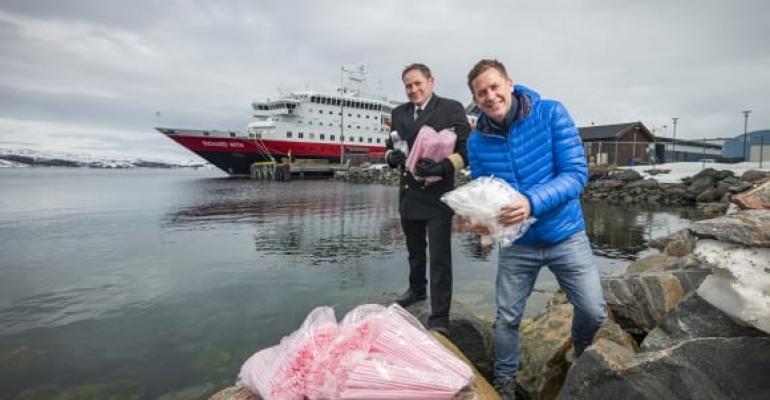 One million straws a year are among the single-use plastic items that will be removed from all Hurtigruten ships. Pictured are CEO Daniel Skjeldam, right, and hotel manager Kristian Skar
Hurtigruten has become one of the first major companies to ban all unnecessary single-use plastic.

By July 2, items like plastic straws, drink mixers, plastic glasses, coffee lids and plastic bags will be removed from all Hurtigruten ships. The goal is to become the world's first plastic-free shipping company.

'At Hurtigruten, we have focused on the problem of plastic pollution for years,' CEO Daniel Skjeldam said. 'There is a lot of talk about the impact plastic has on our oceans. But it’s time to take action. By getting rid of single-use plastic on board all ships already by this summer, we will hopefully get others to follow. It is possible to act now, and the oceans cannot wait.'

Plastic straws will be replaced by metal straws, and stir pins will no longer be used. The same for plastic cups, plastic cutlery, plastic bags, plastic lids on coffee cups, plastic toothpicks, plastic aprons, single-use packaging of butter and all other single-use plastic items that Hurtigruten’s 400,000 passengers and 2,500 employees encounter on a day-to-day basis.

'Every year, Hurtigruten guests and employees clean tons of plastic from beaches in the areas we operate. We witness the plastic pollution problem on a daily basis, and need to take action. Operating in pristine areas as we do, comes with a responsibility,' Skjeldam said.

15 metric tons of plastic ends in the oceans every minute

According to Hurtigruten, a mind-boggling 15 metric tons of plastic ends in the oceans every minute of the day. If the trend continues, this number will double in the next 10 years. This means that by 2050 there will be more plastic than fish in the oceans.

'Plastic pollution is the single biggest threat our oceans. Hurtigruten operates in some of the most vulnerable areas in the world. This means that we carry a special responsibility to protect these areas for the local population and future generations of explorers,' Skjeldam said.

The single-use plastics ban will be effective across the entire Hurtigruten fleet, including ships operating the Norwegian Coastal Voyages and expedition cruises from pole to pole.

The single-use plastic ban will also be imposed on the hotels, restaurants and other establishments of Hurtigruten’s land-based operations on Svalbard, operated by its fully owned subsidiary Hurtigruten Svalbard.

In addition to the internal plastic ban, Hurtigruten is challenging all its suppliers to reduce the use of plastic.

'No one can win the war on plastic alone without allies. This is why we implement high demands on our suppliers,' Skjeldam said. 'Our goal is to become the world’s first plastic-free shipping company. This is our first step.'

Ships to be retrofitted for LNG and battery propulsion

Hurtigruten’s single-use plastic ban comes just a few days after the company announced the largest environmental upgrade in its 125-year history. Up to nine ships will be retrofitted for LNG and battery propulsion.