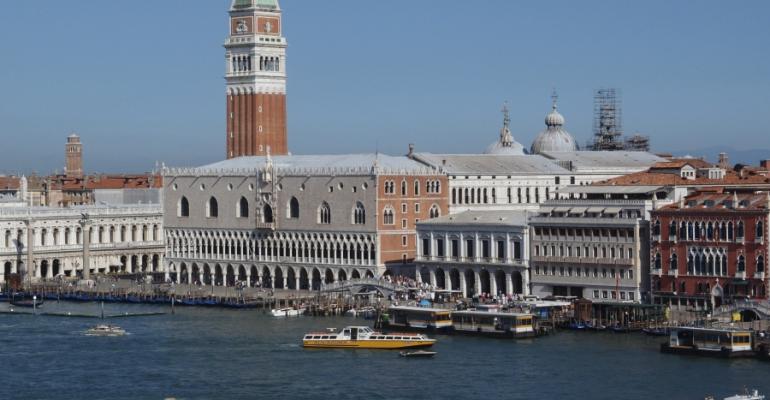 Restrictions on large cruise ships' navigation past St. Mark's Square have been reinstated

The Italian government approved a plan to immediately launch an environmental impact study for a new Venice Lagoon channel for cruise ships to reach the Stazione Marittima’s cruise terminals. Meanwhile, the St. Mark's Square and Giudecca Channel cruise ship restrictions decreed in 2013 and subsequently overturned will be reinstated.

To maintain Venice as a cruise ship hub and safeguard the economic impact and jobs created by cruise tourism, the Italian government's Venice Committee has decided that Stazione Marittima is currently ‘the only effective port solution for national and international cruise traffic in the Venice Lagoon area,' according to a statement by the government’s Ministerial Council.

Other locations for passenger ships had been considered.

The Venice Committee agreed the Contorta-Sant’Angelo Channel excavation project is the only current option with the level of detail to merit an environmental impact evaluation. According to Minister for Transport and Infrastructure Maurizio Lupi, the committee has given the green light to the evaluation, which has to be conducted in 90 days to conform to requirements for protecting the Venice Lagoon and comply with the 'Venice and its Lagoon' UNESCO World Heritage Site designation.

Environmental groups are criticizing the decision, claiming Venice is at risk from the more than 600 cruise calls annually. They allege the exhaust and vibration of big ships damages the historic buildings and fragile structures in the lagoon and fear a catastrophe if there were a grounding like that of Costa Concordia.

Instead of reaching Stazione Marittima through the current Lido passage between the Adriatic Sea and the Venice Lagoon by transiting the Giudecca Channel past St. Mark’s Square, officials decided the only viable alternative will have cruise ships enter through the Malamocco southern passage and briefly follow the commercial ship channel to Marghera port. The to-be-excavated 4.8-kilometer Contorta-Sant’Angelo Channel will branch off from this channel to reach Stazione Marittima.

According to the latest forecast, the excavation will take approximately 18 months, putting the timetable for the whole project at around two years. €115m in funding needs to be found and permits obtained.

Other projects could be evaluated if they advance to a sufficient level of detail, the Ministerial Council statement added.

Meanwhile, the Venice Committee agreed that an Italian government inter-ministerial decree will be soon be issued with the same cruise ship navigation restrictions imposed by a 2013 decree that was overturned in March by the Veneto Regional Administrative Tribunal.

The decree banned cruise ships of more than 96,000gt from sailing through central Venice starting in January 2015. It also called for a year-over-year 20% reduction, starting in January this year, in the number of ships larger than 40,000gt allowed to sail through Giudecca Canal and past St. Mark’s Square.

Cruise Lines International Association members have been voluntarily complying with these restrictions while awaiting a solution to the transit debate, which all the interested parties hope to have reached with the Contorta Sant'Angelo Channel project.