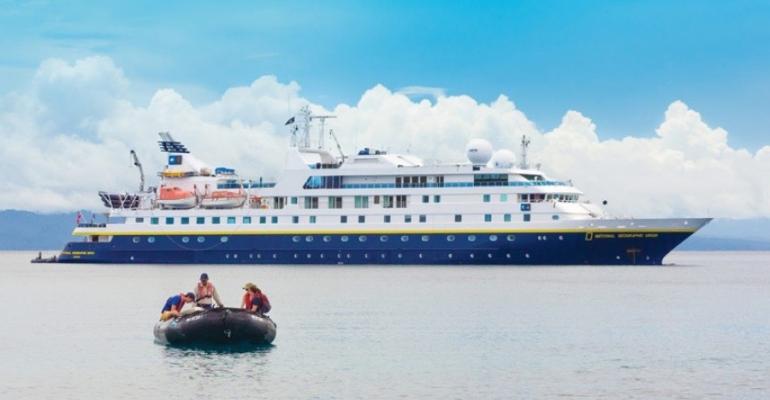 In its first earnings report as a public company, Lindblad Expeditions posted a second quarter 9.1% increase in earnings before interest, taxation, depreciation and amortization despite slightly weaker ticket pricing related to softer demand for cruises to Africa and the Indian Ocean. The company also said it expects to contract a pair of coastal newbuilds in the third quarter that would enter service in Q2 2017 and 2018.

Lindblad generated tour revenue of $49.5m, down slightly from $50.8m in Q2 2014, due to discounts related to National Geographic Orion's Africa and Indian Ocean-based voyages because of the EBOLA scare and the softer economy in its Australian source market. In the first half of 2015, tour revenue was $105m compared to $102.2m in the prior year period.

'We are pleased with our results in the second quarter which demonstrate consistent performance by our existing fleet,' said Sven-Olof Lindblad, president and ceo of Lindblad Expeditions Holdings. 'We delivered a 9.1% increase in adjusted EBITDA compared to the prior year quarter, despite a slight decrease in guest ticket revenues compared to the prior year quarter related to softer demand for Africa and Indian Ocean based voyages by the National Geographic Orion.'

Lindblad noted Orion will be redeployed to Europe in summer 2016 as part of the company's already planned integration of the Orion acquisition into the fleet.

Adjusted net cruise cost per available guest night declined 9.4%, to $690.45, mainly due to lower fuel costs and a decrease in drydock expenses and maintenance costs for the owned fleet.

The company expressed confidence it will achieve the 2015 financial projections outlined in its investor presentation filed with the Securities and Exchange Commission on April 1. Revenue is projected to be $204m and adjusted EBITDA $45m for the full year.

The anticipated newbuild contracts will be for 100-passenger, US-flag ships, allowing Lindblad to 'capitalize on the strong demand for our expeditions with routes similar to existing ones where demand is in excess of our capacity,' Sven-Olof Lindblad said.

'We are also reviewing a variety of acquisition opportunities that we believe would be accretive to our planned expansion,' he added. 'Given our strong capital position and the fragmented nature of our industry, we are well positioned to act as a platform to facilitate consolidation.'

CFO/operating officer Ian Rogers said that while it is too early to provide a detailed picture for 2016, bookings remain strong with 43% of ticket revenue for the year on the books, as at June 30, compared with 40% in 2014 for the 2015 financial year.

On July 8, Lindblad and Capitol Acquisition Corp. II completed their merger, with Lindblad becoming a wholly-owned subsidiary of Capitol. Immediately following the merger, Capitol changed its name to Lindblad Expeditions Holdings and its common stock and warrants began trading on the NASDAQ Stock Market.