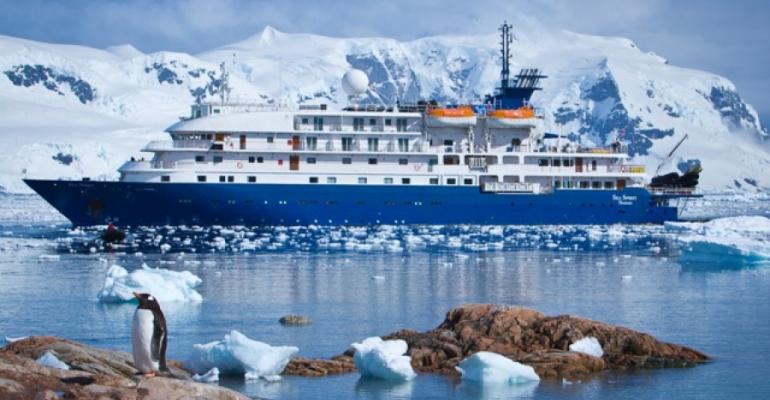 Novaya Zemlya in the Russian High Arctic is newly featured in Poseidon Expeditions' just-released 2016-17 schedule for Arctic and Antarctic expeditions aboard the 116-passenger Sea Spirit.

Poseidon will offer a wide range of Arctic cruises, beginning with programs from Iceland to West Greenland in May 2016. These will be followed by cruises to Svalbard, Franz Josef Land and—new for summer 2016—Novaya Zemlya in the Russian High Arctic. Considered Europe’s northeastern-most corner, Novaya Zemlya provides intrepid travelers the chance to experience wildlife in an ecosystem that is rarely visited by expedition vessels.

2016 Arctic rates for the all-suite Sea Spirit begin at $6,195 per person, double occupancy, and $4,895 per person in the ship’s spacious Triple Suites.

Following the Arctic season, the vessel will reposition to South America for a series of expedition cruises to the Antarctic Peninsula, South Georgia and the Falkland Islands during the 2016-17 austral summer.

Newly announced prices for Poseidon’s Antarctic cruises compare favorably with the company’s 2015-16 rates, and offer values in the luxury expedition ship category. 2016-17 rates start at $5,995 per person in a Triple Suite and $7,695 in a double-occupancy Main Deck Suite.

For both the Arctic and Antarctic seasons, travel agents and consumers can take advantage of early booking savings of 10% to 15% off regular rates. These savings will be available through September 2015.

For 2016-17, Poseidon has also reduced the price for single occupancy of Superior Suites, and will make more Classic Suites or Triple suites available, depending on demand from customers seeking more availability in these categories.

Built in 1991 as Renaissance V, the ship sailed for a decade in Alaska and worldwide as Spirit of Oceanus. Technical improvements for polar cruising were carried out in 2010, and the ship has been providing expedition cruises in the Arctic and Antarctic as Sea Spirit the past five years.

Poseidon also offers travel to the North Pole aboard the nuclear-powered icebreaker 50 Years of Victory. Three 14-day Top-of-the-World programs are scheduled for both the 2015 and 2016 summer seasons.

2016-17 Arctic and Antarctic schedules and rates are at www.poseidonexpeditions.com.