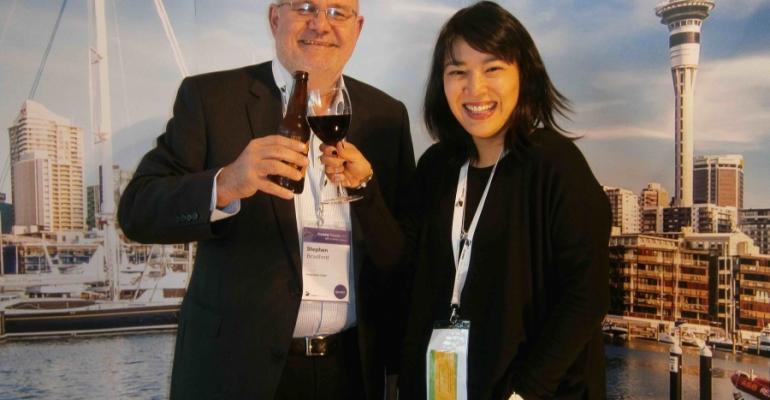 Raewyn Tan toasts the release of Cruise New Zealand's latest economic impact report with Stephen Bradford, the chairman of Cruise Down Under, who was a guest speaker (Photo: Helen Hutcheon)

The value-added cruise business is currently worth NZ$436.05m and supports 8,365 jobs with history-making growth forecast, delegates at Cruise New Zealand’s third annual conference in Auckland on Friday were told by gm Raewyn Tan.
The value-added estimate for 2015/16 is NZ$543.25m.
However Tan, who delivered CNZ’s 2014/15 economic impact report, warned that the Border Clearance Levy introduced in the government's May budget would curb the forecast growth.
The Coalition Against Travel Tax (CATT) led by the Tourism Industry Association New Zealand has called on the government to rethink the new tax which it said was put together in great haste immediately before the May budget with very limited analysis and no consultation.
CATT said it was understood in New Zealand that border services are a public good and should be funded from general taxation. If it is to be imposed, CATT said it needs significant amendment and has asked that it be delayed until January 2017 to allow this to happen.
Tan said 201,370 passengers arrived in New Zealand during the 2014/15 cruise season, amounting to 1,125,547 passenger port days.
The number of crew was 75,400 with a total of 420,632 crew port days.
The survey showed that about 95% of passengers disembarked at each port and 45% of crew disembarked at any port call.
There was an average of 4.64 hours spent ashore and 45.9% of passengers bought a tour, with 68% buying tours from cruise lines.
Australia was the largest source market, making up more than half of all passengers and 85% of them were in transit.
The United States, the second largest source market, accounted for 16.5% of passengers with about two thirds staying ashore pre- and post-cruise.
Around 67% of embarking passengers had a pre-cruise stay of 2.2 nights and 40% of disembarking passengers had a post-cruise stay that averaged 2.9 nights.
Shore excursions, shopping and food and beverage accounted for 88% of transit passenger spend. Those same three categories accounted for 69% of crew spend.
The overwhelming majority of passengers praised shoreside welcomes and said their expectations were exceeded.
Copyright © 2023. All rights reserved. Seatrade, a trading name of Informa Markets (UK) Limited.
TAGS: people ports & destinations events financial associations economic impact
0 comments
Hide comments
Related